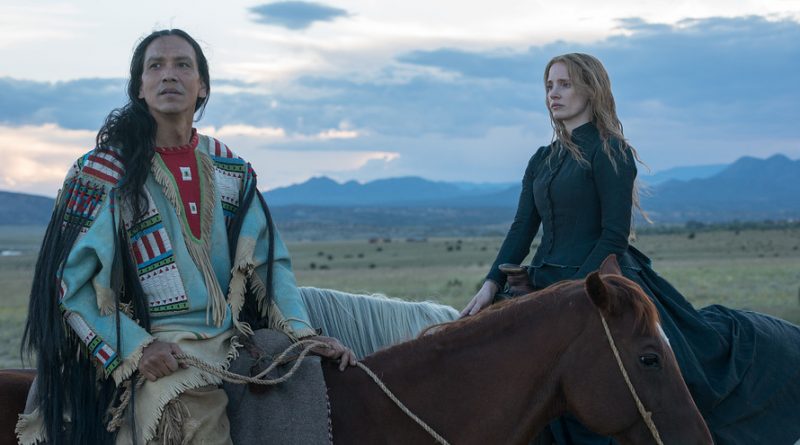 Director Susanna White’s woman-centric Western stars Jessica Chastain as a painter who travels from New York into the West with the intention of painting Sitting Bull. Once again, Chastain lands a role as a strong woman carving out her own way in the world. The story is based on a real person, who did travel to North Dakota and became a confidant and adviser to the Lakota chief. Continue reading…

In Woman Walks Ahead, which debuted at TIFF, Chastain plays Catherine Weldon, a New York widow whose ambitions to be a painter were frustrated by her marriage and the restrictions placed on women in 1880s America. Weldon, who has both wealth and family connections, defies convention to set out alone for the Western frontier with the intention to paint a portrait of the great chief Sitting Bull. When she arrives, she is not greeted warmly by the commander of the local fort, James McLaughlin, and with open hostility by Colonel Silas Groves (Sam Rockwell), an Army officer sent with the details of a new treaty that will strip the Lakota or most of their land. Both men try to send her back east but despite that, she does meet Sitting Bull (Michael Greyeyes). The chief, now trying to live as a farmer, is not too thrilled with the idea of having his portrait painted and demands payment of $1000. Nonetheless, the two form a bond and Catherine finds herself caught up in the Lakotas’ plight.

Screenwriter Steven Knight’s script deviates from history in some ways but sticks to the facts on other points. Even without knowing much of the history, most viewers will be aware that Sitting Bull seems way too young in this story, which takes place years after Custer’s last stand at Little Big Horn. Both the actual Sitting Bull and Weldon were in their 50s when this meeting took place, but casting the beautiful Chastain and handsome Canadian actor/dancer Michael Greyeyes in the roles does give the screen more visual appeal. Further, the real Weldon’s name was Caroline, and she was divorced, not widowed, but she really did become Sitting Bull’s adviser. The film compresses time and it also shows Weldon as really only interested in painting at first, while concern for the Native Americans’ cause was part of what drew the real Weldon west from the start.

Chastain and Greyeyes deliver winning performances, and develop a charming warmth in their scenes together. They get all they can out of the characters without straying from historical fact. Sam Rockwell brings the right touch of menace while still keeping us guessing about his character. The rest of the supporting cast is good too, particularly Chaske Spencer as a Lakota lawman working with the military.

The photography and locations are well done as well but the story never seems to generate as much energy as one would like, given the history. Still, Woman Walks Ahead gives us a chance to meet this bold woman who ventured West to meet Sitting Bull.