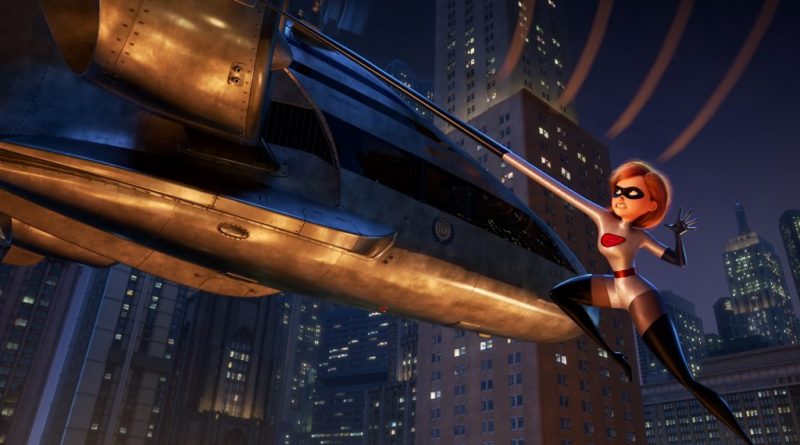 The 14 years between “Incredibles” and “Incredibles 2” woke up a few film folks to feminism, for “Incredibles 2” is female-centric. Thank you, Brad Bird. Bird wrote and directed the sequel to his Pixar story of a family of super heroes to create a bam biff pow story. Continue reading…

The family is Parr for the course. Bob Parr has upper body strength, as befits the only physical property that men have over women. Bob is a k a Mr. Incredible — NOT Mr. Mediocre, he declares. Helen Parr is a good-hearted women. The two Parrs parents the three little Parrs: Violet, Dashiell, and Jack-Jack. They are no longer super heroes ever since that designation was outlawed in Municiberg. That means that their bright red Spandex outfits have been folded and put away while they struggle to be normal.

However, due to a loophole, Helen is allowed out as Elastigirl to save the world (never mind the details), which leaves Bob home to watch the children. As the days pass by, he grows a face shadow and bags under his eyes from sleep-deprivation as he gets a hint of what mothering amounts to. Bob also discovers that baby Jack-Jack has super powers, like laser eyes, which leads Dad to warn Jack’s siblings not to fire their brother around the house.

Bird’s complex script, which breaks for silliness befitting animation, includes jokes, like exhorting Elastigirl to “break a stretch” instead of “break a leg” and a boat named the Everjust. Bird’s script is voiced, in part, by women with distinctive sounds: Catherine Keener, Sarah Vowell, and Holly Hunter. Craig T. Nelson, Samuel L. Jackson, and Bob Odenkirk manage the men’s roles. But it’s the females whose roles are highlighted in Incredibles 2. The kids mean it when they order their superhero mother, “Go! Save the world. We got this!”