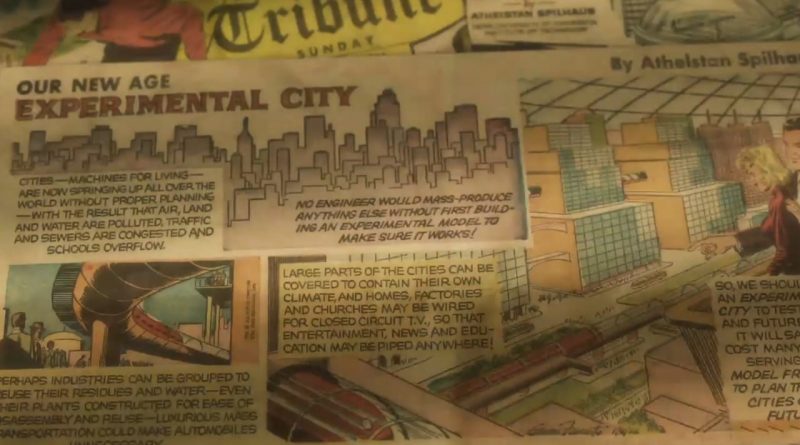 The Experimental City chronicles an inventive, futuristic venture. Athelstan Spilhaus is not well-known but should be. He can still teach our environmentally abusive and wasteful society a great deal, for he spearheaded an impressively progressive, inventive futuristic venture beginning in the 1960s. Spilhaus and a distinguished steering committee, including Buckminster Fuller, researched and proposed an experimental city of 250,000 residents to be built in northern Minnesota. Continue reading…

South African by birth, M.I.T. educated, Athel, as his friends call him, authored the Our New Age comic strip from 1958 to 1975. In it, he envisioned science-based ideas for a futuristic world. There and his proposed experimental city included lifelong learning, individual computers with on-line shopping, cars on the city boundary with an automated people-moving system (think driverless vehicles), waste recycled and pollution minimized—all decades ahead of his time. Already an oceanographer, meteorologist, cartographer, mechanical engineer and atmospheric scientist, Athel couldn’t tolerate inefficiency. He bemoaned restrictive legislation and unplanned, unhealthy growth, his pronouncements as relevant today as then, if not more so.

In his documentary The Experimental City, director/editor Chad Friedrichs details this entire project, from conception to private and public funding, from political involvement (including of Minnesota’s Hubert Humphrey) and hearings, to bureaucratic problems and protests. Interviews provide perspective, especially those with Minnesota Star and Tribune publisher Otto Silha and Spilhaus biographer and friend Louise O’Connor. Kudos to producer Brian Woodman, curator for Washington University Libraries’ Film & Media Archive, for an amazing wealth of audiovisual archival footage. Cleverly bringing the 60s and 70s to life, when only audio exists for the principals, reenactments use their voices with actors shown only from shoulders down thereby creating what feels like the real event.
The Experimental City educates us to an important, relevant chapter in imaginative design.