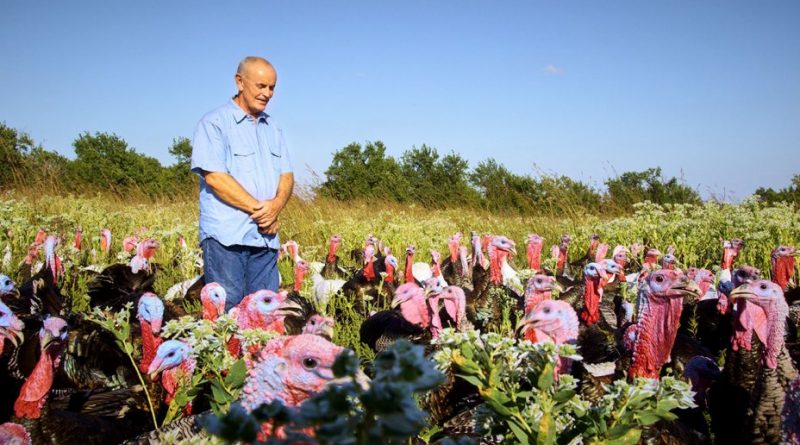 Eatings Animals is hard to watch, but watch it we must if we’re to maintain any semblance of a healthy society. Director Christopher Dillon Quinn based his hard-edged documentary on Jonathan Safran Foer’s 2009 book of the same title. Actor Natalie Portman co-produced; she also narrates. Continue reading…

Quinn interviews farmers who take pride in their heirloom turkeys, in their hens, their swine. He interviews Frank Reese, who owns the Good Shepherd Poultry Farm in Linsborn, Kansas. Reese sighs and says, “No one fired a pistol to mark the race to the bottom.”

Then Quinn moves to North Carolina to show, from the air, lagoons of Pepto Bismol pink effluvia from swine. Hundreds of pools of what the neighboring farmer calls “fecal marinade.” That’s a factory farm.

Quinn interviews ag men, professors of environmental studies, and government officials. He includes Dr. Temple Grandin among the talking heads, and also a whistle blower, who paid the price of vigilance with his marriage. One of the experts says, “If the consuming public saw what [animal agriculture] looked like, they would stop eating it.”

This documentary shows what it looks like: featherless chickens that never see the light of day, pigs piled one atop another — 400,000 swine killed a day, turkeys with mutant fat genes. Another expert adds, “You vote with your fork three times a day.”

The American government, in the body of the USDA, is found wanting as family farms, the original small business in this nation, go under the weight of factory farming by Tyson and Perdue, corporations referred to as “morally loathsome.”

Eating Animals should probably play on a continuous loop in the meat department of most grocery stores until something is done, but no one will be able to watch without wincing.