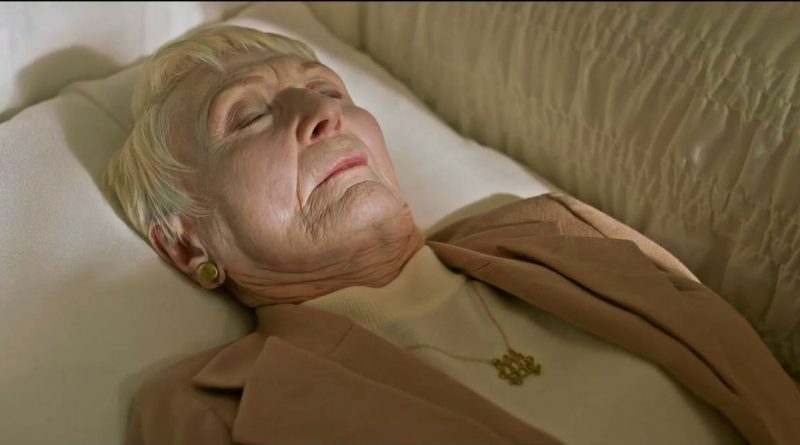 Australian actress Toni Collette becomes the new ‘scream queen’ in Ari Aster’s terrifying psychological thriller about parents left with a diabolical legacy after the family matriarch’s death. This ominous story begins with a terse eulogy for dementia-addled, 78 year-old Ellen Taper Leigh by her dry-eyed daughter Annie Graham (Collette), who describes her difficult mother as so secretive and suspicious that she won’t be missed by those left behind. Continue reading…

“Should I be sadder?” Annie asks her soft-spoken husband Steve (Gabriel Byrne).

Barely surviving a harrow childhood with a suicidal father, schizoid brother and this mysteriously remote mother, Annie is an artist who lives in an architecturally magnificent home in rural Utah, where she creates a mixed-media tableaux of tiny, detailed doll houses that are filled with miniature representations of herself.

One week after her mother’s burial, Annie discovers her secret journal about spiritualism and glimpses a barely visible phantom, her mother’s ghost.

Shortly after, when a bird flies into the window of the tree-house where Annie’s 13 year-old daughter Charlie (Millie Shapiro) likes to sleep, she calmly picks it up and cuts off its head with a pair of scissors. And Annie’s older son, Peter (Alex Wolff), a moody, pot-smoking high-school student, gets involved in a fatal car accident.

As part of her mourning, Annie goes to a grief-counseling group in which a participant relates how she contacted her dead son with the help of a medium. so Annie conjures up her own séance, trying to reach Charlie.

On the Granger Movie Gauge of 1 to 10, “Heredity” is a manipulatively subtle 7, scary stuff.