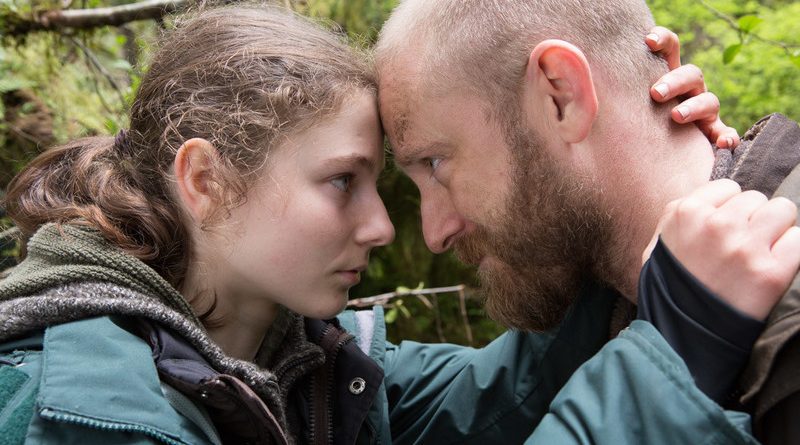 Quiet and understated, Leave No Trace delves into difficult issues with compassion and suggestion in place of explicit, heavy-handed drama. Veteran father Will finds interacting with people impossible to accommodate. As a result, he lives outside Portland, off Oregon Highway 30 West, in a state forest with thirteen-year-old daughter Tom whom he educates to survival off the grid and avoiding detection as well as to academic subjects. This is not an abusive relationship intellectually or emotionally. In fact, Tom excels at her studies, testing ahead of her age group. Continue reading…

Nevertheless, challenges arise when authorities discover, apprehend and work to integrate father and daughter into the mainstream through a social services network. At one critical juncture, Tom wisely observes, “I think it might be easier on us if we try to adapt. We can still think our own thoughts.” Therein lies the divide that makes Will’s situation so heartbreaking because, for him, this is no longer a choice. As events unfold, both must make life-defining decisions.

Every detail of this carefully constructed film reveals Tom’s and Will’s cultural and personal perspectives, more one of opposition for Will than for Tom. Throughout relocation and flight, their affection never wavers even with Tom’s increasingly inevitable movement to integration into society, a change that Will’s PTSD (this our assumption since very little backstory provides explanation) makes impossible for him. By contrast, Tom responds appropriately to the generous, supportive society they encounter since, as she says, she is not inflicted with the same problem as Will.

Thomasin Harcourt McKenzie delivers an intelligent, thoughtful interpretation of Tom’s circumscribed world. In a measured, impressively honest performance with thoughtful responses to everyone, McKenzie repeatedly communicates, quite calmly, what she feels, states it clearly, and listens for a reply. Interacting with the always superb Ben Foster as her father Will, she feels totally authentic. For his part, Foster makes every nonverbal gesture, however subtle, revealing and meaningful. Remarkably, no villains distract from the supportive but decidedly restricted world Will and Tom inhabit. I suspect we who are even occasional backpackers and campers grasp the exhilarating appeal of escape from our often-oppressive social environment.

Adapted by Debra Granik and her writing partner Anne Rosselini from Peter Rock’s 2009 novel My Abandonment, the script shows the same profound, compassionate understanding of human relationships showcased in Granik’s breakout hit Winter’s Bone. Granik understands the elusive and complex dynamics of intimate connections without relying, as too many Hollywood films do, on violence or improbable events. Instead, deftly she delves into emotional dependence that gradually evolves into recognition and assertion of one’s own values and identity. Events here convincingly reveal truths about slowly dawning perspectives we gain throughout our lives, our reactions defining who we are, what we can handle and what defies our capabilities.

Cinematographer Michael McDonough brings the forest environment to life in a beautifully seductive way. Dickon Hinchliffe’s music seldom interprets the mood, but when it does, tension increases exponentially. Leave No Trace is extraordinary for its multifaceted exploration of this tender relationship devoid of histrionics, thereby encouraging reflection on PTSD afflicted veterans, the relatives they love and who love them. Leave No Trace is an exceptional film, already on my list of the best of 2018.