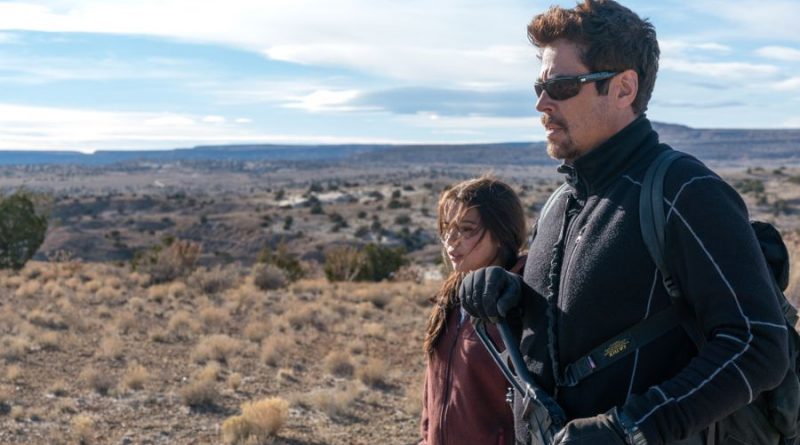 There’s no Emily Blunt as the FBI agent who served as the conscience of the 2015 original, so this sequel come across as amoral, ultra-violent and, unfortunately, all too timely, given the “zero-tolerance’ escalation of U.S. immigration crisis. Indeed, it begins as illegal Mexican immigrants are attempting to cross into the United States. When the Border Patrol stops one of the refugees at gunpoint, he blows himself up, detonating an explosive vest. Continue reading…

Cut to ISIS terrorists blowing up a store in Kansas City, Missouri, while a mother pleads for the life of her child.

Josh Brolin reprises his role as compromised CIA operative Matt Graver, taking cues from his handler Cynthia Foards (Catherine Keener) and the Secretary of Defense (Matthew Modine), who notes, “The President is adding drug cartels to the list of terrorist organizations.”

Back too is Benicio Del Toro as enigmatic Alejandro Gillick, Matt’s secret-opps ally who is after the ‘bad hombres’ who smuggle Islamic terrorists across the border.

They come up with a misguided plan to ‘kidnap’ and ‘rescue’ Isabella Reyes (Isabela Moner), a cartel kingpin’s bratty daughter to incite a war between two Mexican drug syndicates. But the plan backfires when her father seems willing to sacrifice the troublesome teenager as collateral damage.

That leaves vengeful Alejandro in the desert, torn between the CIA’s order to eliminate the girl and his deepest paternal instincts.

Plus, there’s a subplot involving Miguel Hernandez (Elijah Rodriguez), a Mexican-American youth with relatives on both sides of the border, who joins a gang of human traffickers.

FYI: While the word “soldado” means soldier, it also incorporates the word “dad.”

On the Granger Movie Gauge of 1 to 10, “Sicario: Day of the Soldado” is a somber, savage 6, as sinister and intense as the nightly news from McAllen, Texas.