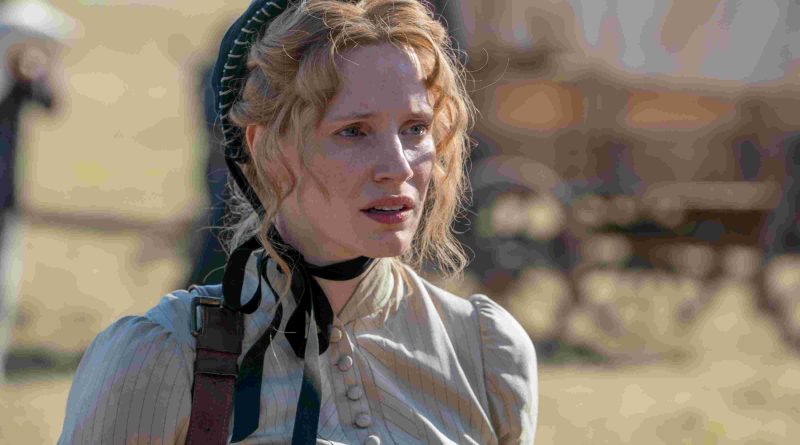 Dubbed an “eastern agitator,” Weldon’s unwelcome arrival on the Western frontier is mocked by Col. Silas Grave (Sam Rockwell), and she’s ordered to board the next day’s train back East by Fort Yates’ dismissive Commanding Officer (Ciaran Hinds).

Although he demands monetary compensation and they verbally spar for a while, proud Sitting Bull agrees to pose, while Weldon becomes embroiled in his struggle to retain rights to the Lakota land.

Surprisingly, they’re assisted by the arrival of the U.S. Cavalry’s Gen. Cook (Bill Camp), who has his own reasons to encourage the assembled tribes to oppose the proposed Allotment Act, a gesture of defiance which led to the 1890 Sioux massacre at Wounded Knee.

According to Jessica Chastain, “There were three reasons why I made this film: forgotten women in history, (director) Susanna White and (actor) Michael Greyeyes. His parents were taken away from their parents to be raised in Caucasian households to get the indigenous culture out of them – that was the goal. It’s devastating!”

In English and Sioux, on the Granger Movie Gauge of 1 to 10, “Woman Walks Ahead” is a perceptively plaintive 7, recalling our Native American ethnic tragedy, made timely by the current agitation at Standing Rock.

EDITOR’S NOTE: Woman Walks Ahead is AWFJ’s Movie of the Week.