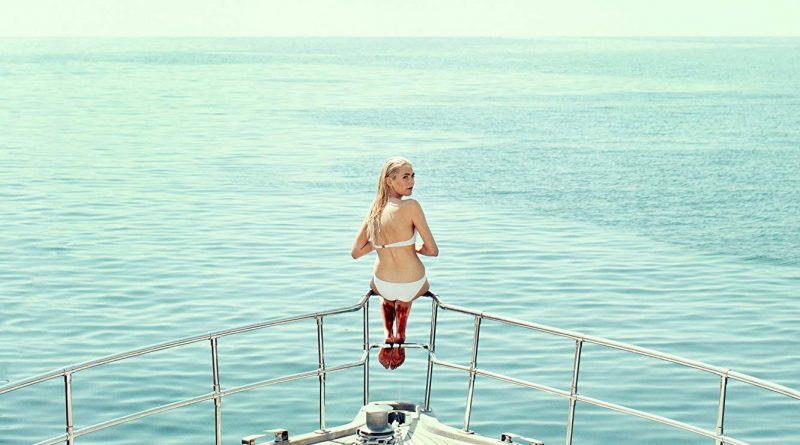 To say that not everyone will be taken with Swedish filmmaker Isabella Eklöf’s feature is an understatement: the film is a deliberate provocation, executed with almost surgical precision. Premiering at Sundance in January, 2018, and since playing festivals around Europe, South America, Asia and Australia, the film’s status as an international co-production is mirrored in the deliberate border-crossings so central to its story about a young Scandinavian woman on vacation in Turkey. She is there as a guest of her lover, a brutal drug dealer and crime boss, and finds herself befriending another man who is holidaying in the same area with disastrous consequences. Continue reading…

The young woman is Sascha, played by Victoria Carmen Sonne, and the two men – Michael and Thomas – are Lai Yde and Thijs Römer. From the very outset of the film, the world that Sascha lives in is one unambiguously dominated by male violence, but the film’s core site of interest is how Sascha seems to almost have brainwashed herself into believing this is just part of life – business as usual.

This is a difficult but hugely important story in a #MeToo context where the aggression and abuse women learn to tolerate and convince themselves is ‘normal’ is here revealed in a tragic story of a young woman’s total submission to a system where she cannot win. The film’s painstaking dedication to a glossy fashion magazine aesthetic underscores this stylistically: it’s all about the surfaces, it’s all about looking happy and successful. Forget about the grim, horrid reality that lies underneath.

Within the unfolding parade of atrocities Sascha seems to almost casually accept as part of her normal life lies a supremely distressing rape scene. Male critics in particular have largely gone the easy option here in their comparison to Gaspar Noe’s Irreversible, but aside from the single take and the temporal duration of the sequence, this is an unhelpful point of reference. Partially this is because Eklöf deliberately strips back the stylization of this sequence: there’s no foreboding soundtrack, there’s no amplification of the color contrast, there’s no computer-generated penis. In fact, the scene is in a practical way formally not marked as being any different tonally from the moments surrounding it. Rather, the long, horrendous and undeniably shocking assault plays out in an important continuum; it’s just part of Sascha’s everyday life. Distressing in itself, the way that Eklöf cleverly implies that this is not a one-off and is probably something that Sascha has endured many times before is what makes this harrowing scene even more unendurable.

There is, of course, a pressure point, a moment of release, but where that is and the ethical complications of it are at the heart of what makes this film so significant in terms of the usual moral binaries applied to men in films about the abuse of women, and contains the film’s ultimate twist. Without revealing that, it is enough to say that Holiday will not please everyone: it is not a pleasing film, and nor does it intend to be. It is a difficult, confrontation movie that offers no easy solutions. Underneath the sunshine, blue skies and neon-coloured bikinis, Holiday reveals the dark, murky reality of what so many women must contend with just to survive day to day.