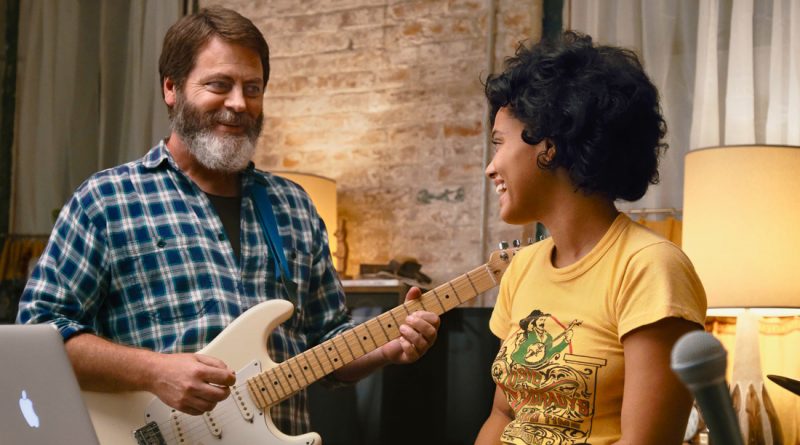 Mired in debt and facing an empty nest, Frank’s ready to move on, informing his landlady/potential love interest Leslie (Toni Collette) that – after 17 years – he’s decided not to renew the lease, closing down the store. But before she leaves for California, Frank wants to have another jam session with Sam, who reluctantly humors him, playing keyboard to his guitar. (The actors actually perform the electronic indie-pop, credited to composer Keegan DeWitt.) Continue reading…

Without Sam’s permission, Frank impetuously uploads their catchy, improvised song to Spotify, only to discover that it’s suddenly streaming. On the basis of that one song, Frank starts trying to book gigs for the “band,” even meeting with a recording guy who promises to “monetize this thing.”

That’s the gist, although subplots abound. Frank’s often forced to bail his Alzheimer’s-addled, shoplifting mother, Marianne (Blythe Danner) out of jail. And Sam unexpectedly becomes enamored with Rose (Sasha Lane), whom she meets at a local Dustin Yellin art show.

Allegedly inspired by an actual Red Hook record store run by Bene Coopersmith, this indie comedic/musical drama, focused on the father/daughter dynamic, is leisurely scripted by director Brett Haley and co-writer Marc Basch, as another low-key character-study like their previous collaboration “The Hero,” starring Sam Elliot.

On the Granger Movie Gauge of 1 to 10 “Hearts Beat Loud” is a subtly sensitive, sincere 7. This beat has heart.