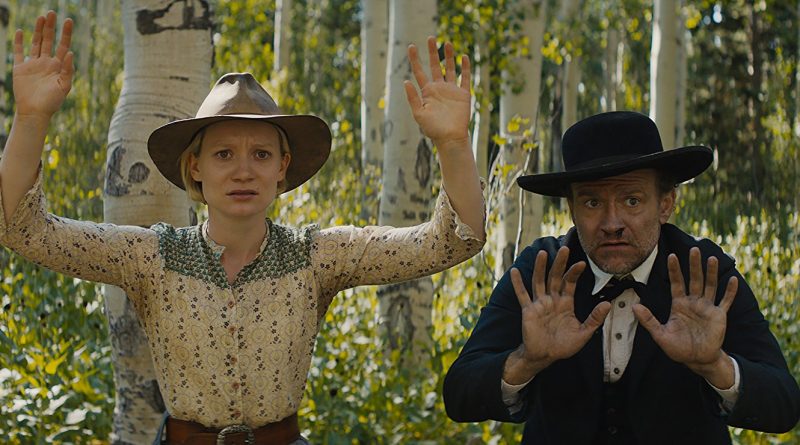 Never lose sight of the title of this weird Western. Just when you think Damsel is about the character named Samuel Alabaster, the focus shifts to Penelope, his intended bride. Samuel is rich and forceful. He has a ring for his fiancee and he has brought her a gift, a miniature horse named Butterscotch. Continue reading…

To seal the deal, Samuel hires a preacher to unite the two young people in holy matrimony. Only, Samuel does not know what we know, what we learned in the opening scene. A preacher is waiting for the stagecoach alongside another man, who’s looking to start life anew. Preacher says, “I’m leaving the West. I done my time here.” And he hands off his preacher’s tabs and his cannibalized Bible, the Scriptures having gone for rolling papers and hygiene, he explains. Which leaves the other man to assume the role of Parson Henry as hired by Samuel.

The two of them find Penelope, but she’s not in a marrying mood. She’s in a kind of bad mood, one that sees her through to the end of the story as scripted by David and Nathen Zellner, who also directed. Their script pairs new-fangled phrases with old-fangled ones from Damsel’s setting in 1870. The word play includes these reasons for hanging a criminal for “skullduggery,” “skullthuggery,” and skullbuggery.” The Brothers Zellners’ plot includes comic relief, such as sodden cowpokes comparing their Adam’s apples. And it includes twists.

The two brothers also take parts: Nathan as a swain and David as Parson Henry, looking for a fresh start. Robert Pattinson plays Samuel believably, and Mia Wasikowska plays Penelope with brimstone and a rifle. Adam Stone’s cinematography pulls the eyes into the West with clarity as often as with beautiful blurs. Dominic Preyer supervises the music that laces and trusses and cradles the stories of the weird, wild West and this woman, this damsel, named Penelope.