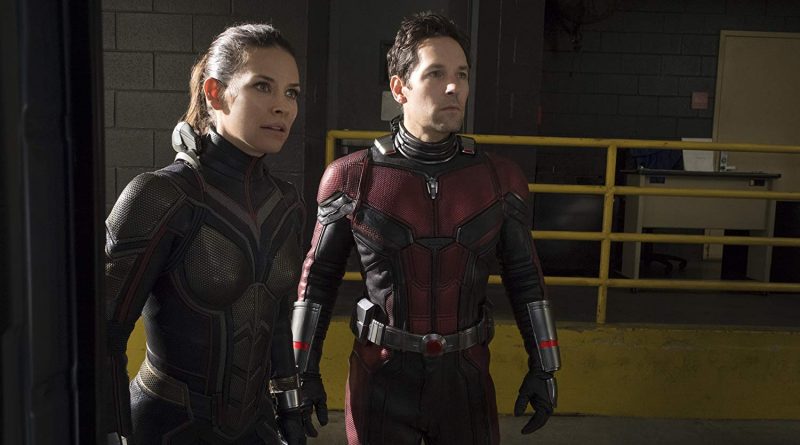 Paul Rudd is back in all of his goofy glory as dad (Scott Lang) also known as Ant-Man in the follow-up to Ant-Man (2015). Here’s the good news: Evangeline Lily, (Hope van Dyne) The Wasp not only has equal movie title billing, but she also works right alongside Ant-Man in fending off evil. No, they’re not out to save the world from doom and gloom—here they work together to save a family member. The film’s core is family driven by comedy buzzing throughout; delightful when compared to the weighty themes of other Marvel films namely, The Avengers: Infinity War (2018). There’s no doubt this mostly PG film could have easily been slated as the perfect summer family-friendly popcorn munchin’ movie—although the PG-13 language that is scattered throughout is not appropriate for youngsters. All and all—an entertaining, refreshing change in the MCU (Marvel Comic Universe) as audiences were giggling and laughing out-loud from start to finish. Continue reading…

The film picks up two years after Ant-Man disobeyed Sokovia Accords while assisting Captain America or Cap as he’s known to his Superhero friends. Seems it wasn’t such a good idea to help out as he’s been under house arrest, spending his days creating extravagant games and adventures to play with his 10-year-old daughter Cassie (Abby Ryder Fortson), all while he checks in on his security business run by the hysterical trio of Michael Peña (Luis), David Dastmalchian (Kurt), Tip ‘T.I.’ Harris (Dave).

Returning Ant-Man director Peyton Reed, roles out the big-screen debut of “The Wasp,” for film audiences to appreciate Hope van Dyne as a fully formed Superhero. Her Mom, Janet van Dyne (Michelle Pfeiffer) has been trapped for 30 years in the Quantum Realm (the minuscule space between molecules). Hope’s father Dr. Hank Pym (Michael Douglas) set out to enlist the help of Scott to rescue Janet as she mind-melded with Scott and their quantum psychic connection remains. Together, the pair Ant-Man and The Wasp fight together in thrilling action sequences with the backdrop of San Francisco steep-hilled streets, (check out the famous zigzag Lombard Street as it makes an appearance) as well as shots of the beautiful city skyline.

Yes, it’s exhilarating to view Evangeline Lily as Hope, The Wasp, in her suit; flying and fighting her distinct way through the film. She not only becomes Ant-Man’s equal partner—we view her develop into her own central character. She keeps Scott out of trouble, by her sharp mind and take-no-prisoners attitude, I wouldn’t be surprised if we see a run on Wasp costumes for little girls around the globe—look out ‘Wonder Woman’ there’s a new role model in town. She and Rudd do play strikingly off of each other, with spot-on timing that makes for a very interesting dynamic.

Another standout performance comes from Hannah John-Kamen as the shimmery Ghost, Ava Starr. Playing a villain, she’s a tormented, vengeful, angry woman whose incentives are intensely personal. She’s teamed up with Dr. Bill Foster (Laurence Fishburne), a disgruntled former colleague of Dr. Hank Pym. Together they create a push-pull effect of good and evil.

The real fun of Ant-man and The Wasp is due to the special effects team that showcases the ‘minimizing and maximizing’ effects that are continually creative. Imagine a gigantic ‘Hello Kitty’ Pez dispenser that’s as tall as a human, or choosing your car from a miniature “Hot Wheels” collection case. Before you can say, super-size, yep, the matchbox car Hyundai 2019 Veloster, complete with a cool flame painted exterior is maximized!

The Bottom- Line: Unquestionably, the recognition of The Wasp (Evangeline Lily’s) superhero’s name in the film’s title is an intelligent choice—along with the decision to center on family. The two hours will fly by (pun intended) as the light-hearted banter is non-stop. Michael Peña’s comedic performance has earned him ‘rock star’ status as the kids in the audience were howling when he appeared on screen. Stay for the credits as you’ll see the set up for the next film.