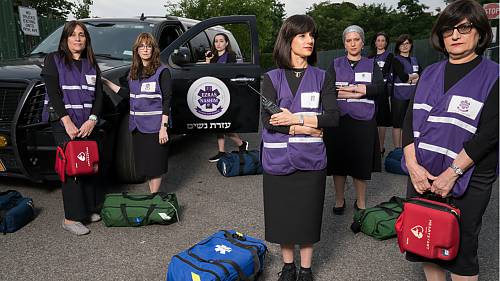 As documentaries go, 93Queen might be constricted in its scope as it details the recent creation of an all-female Hasidic EMT corps of volunteers that serves the male-dominated ultraorthodox Jewish community of Borough Park, Brooklyn. Given how women followers must steadfastly maintain their modesty to the point where showing their bare legs to a man other than their husband is forbidden, it didn’t make sense that an all-male medical emergency squad known as Hatzolah was the only option to handle calls involving births, miscarriages and other indelicate body-exposing medical situations. Continue reading…

Enter Rachel “Ruchie” Freier, mother of six, an ace baker of challah bread (with a fully stocked freezer of braided dough to prove it) — and an attorney. Every true-life account of a crusader who dares challenge patriarchal norms needs a Norma Rae, Erin Brockovich or Katherine G. Johnson for the audience to root for. Director Paula Eiselt – who also handled photography duties as well as being a producer – knows she has struck activist gold in Freier.

Here is someone who defied expectations by getting her law degree at age 40 and yet also goes against feminist ideology by steadfastly adhering to her religion’s strict gender-based rules. Of course, she will succeed and then some. She is also shown in a somewhat dictatorial “my-way-or-the-highway” light, causing some of her team to drop out.

One wishes other members of Ezras Nashim – Women for Women – could have shared more of their back stories. And few men besides Freier’s open-minded real-estate attorney spouse and one Hatzolah member whose identity is shielded as he supports her efforts are heard.

But it is a delight just to be in the company of a spitfire like Freier. She might state that “a woman’s place is in the home” and that “the focus of a woman is being a mother,” but this force of nature also has found her true calling in the world at large.