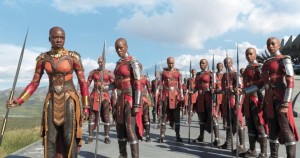 Full disclosure: I don’t like superhero movies as a rule and might not have seen Black Panther for years if I hadn’t been bored during a flight to Seattle. Thus, I am late to the parade of journalists and academics offering their opinions about the film, but I hope not too late to ask you to join me in a march to a somewhat different drummer, as I comment on the subtext of this movie devised by Joe Robert Cole, writer, and Ryan Coogler, writer/director. Continue reading on EYE ON MEDIA

EDITOR’S NOTE: For a range of opinions about Black Panther, you might also be interested in:
BLACK PANTHER — Review by Diane Carson
BLACK PANTHER – Review by Susan Granger