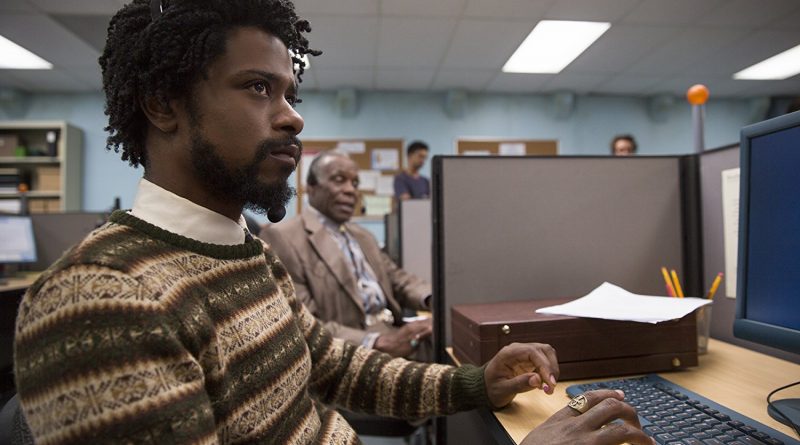 In an introductory scene Cassius Green, called, knowingly, Cash Green, lies in an attempt to get a telemarketing job. He needs it, living in his uncle’s garage in Oakland with his charming, free-spirited girlfriend Detroit who twirls signs in front of businesses to entice customers. Once employed, Cassius yearns to rise to the upper echelons and flattering perks (a golden elevator, among them) of a power caller. Phenomenal success and a promotion follow because he has the uncanny ability to substitute a white voice for his own. But success puts him at odds with colleagues protesting slave wages and embracing union organizing to counter the company’s tyrannical conditions. The sinister world Cassius invades holds more astonishing, disturbing revelations that involve total identity destruction. I leave viewers to discover just how deep Riley goes indicting racism, capitalism, and greed—what he calls moral emaciation.

Visual and audio elements showcase a creative, clever artist. Riley hooks his audience immediately with phone audio even before a despondent Cash appears on screen. Once a telemarketer, Cash literally drops into his call targets’ space, a perfect metaphor for the way telemarketers intrude. But Riley doesn’t stop there. Known for his work with the Coup hip hop group, Riley makes Sorry to Bother You cinematically bold and thematically confrontational. On Fresh Air, he accurately described it as “absurdist dark comedy with magic realism and science fiction.” He breaks and redefines genre expectations, a mind-bending approach that is as welcome as it is inspired.

The actors deliver superb performances: Lakeith Stanfield as Cassius, Tessa Thompson as Detroit, Steven Yeun as union organizer Squeeze, Danny Glover as shrewd advisor Langston, and Armie Hammer as Steve Lift, CEO of the odious Worry Free group. Sorry to Bother You will bother you and should.