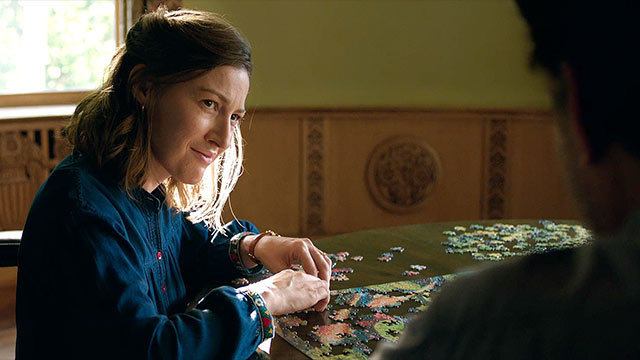 Puzzle opens with a woman (Kelly Macdonald) in an old fashioned dress preparing her home for a birthday party. After we see her waiting on guests, cleaning up after them and bringing out the cake she baked, we discover it is her birthday. Her dress and the decor of the house suggest it is the 1930s or ’40s, so we are again surprised when, after the guests are gone and she is opening gifts, one of them is a smart phone – revealing we are in the present. She doesn’t seem very pleased with the phone, but is more interested in the next gift – a 1000 piece jigsaw puzzle. Continue reading…

Oddly, it is the puzzle rather than the smart phone that changes her tidy, predictable life. Agnes (Kelly Macdonald) is a quiet, old- fashioned, traditional wife and mother whose life revolves around her family, home and church. She is not interested in the outside world and seems content, even happy, to care for her mechanic husband and two teen-aged sons. But it is a life of stifling routine, one without challenges, where she is marking time. Her chores done and with time on her hands, Agnes sits down to do her jigsaw puzzle.

While it is would take most of us several days to put together a 1000 piece jigsaw puzzle, Agnes completes it easily in an few hours. Pleased with the sensation of accomplishment it gives her, she does it again before dinner.

Directed by Marc Turtletaub, Puzzle is actually a remake of a drama by Argentinian director Natalia Smirnoff, a film which won praise at the 2009 Berlin Film Festival.

The acting is the strong point of this remake. The role gives Scottish character actress Kelly Macdonald a chance to shine, as Agnes figures out how her gift for puzzles fits into her life. Casting Macdonald was a brilliant choice, as it a perfect step beyond the servant or wife roles the actress frequently plays, such as in Gosford Park and No Country for Old Men. Pairing her with Irrfan Khan, Agnes’ complete opposite as an oddball tech millionaire obsessed with competitive puzzling, is a perfect move as well, and their scenes together are crackling. The rest of the supporting cast are strong foils allowing Macdonald to explore Agnes’s inner life.

Puzzle is an acting tour-de-force by Kelly Mcdonald as a woman who reconsiders her assumptions about her life and self.