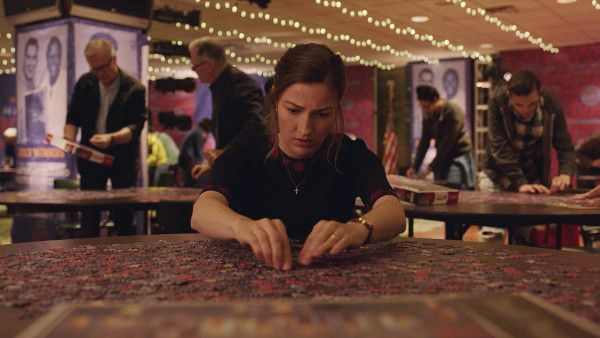 As producer, Marc Turtletaub has been investing cash and cred in femme-centric feature films since 2004, standing behind award-winning films such as Little Miss Sunshine with Toni Collette and Abigail Breslin, and Loving with Ruth Negga among others. Sitting in the director’s chair for this year’s Puzzle, he’s brought to life a most memorable female character named Agnes, a doting albeit repressed housewife and mother who finds her sense of adventure, self-esteem and new meaning in life when she casually enters the realm of competitive jigsaw puzzling. As with Turtletaub’s other cinematic credits, a great measure of Puzzle’s success rests with the film’s leading lady, Kelly Macdonald, whose complex and nuanced performance as Agnes is funny and heartbreaking and entirely relatable. Here’s what he had to say in a chat with AWFJ’s Sarah Knight Adamson after the Chicago Film Critic’s Festival’s May 14 screening of the film at the Music Box Theater. Continue reading…

SARAH KNIGHT ADAMSON: The audience at tonight’s screening reacted very warmly to Puzzle. That must be very gratifying. What do you like best about attending screenings of your films?

MARC TURTLETAUB: You never know how an audience is going to respond. One of the wonderful things about showing a film in front of a live audience, is, just as we had tonight, you feel the dynamic of an audience laughing. You could just feel the response as people are in a room together. You just don’t get that in your living room. We had that same experience at our premier at Sundance, it was as great a night as tonight.

ADAMSON: You’re often associated with films that have strong female leads, as does Puzzle. Let’s talk about your star, Kelly Macdonald. She is one of my favorite actresses. She’s so multidimensional in her ability to do comedy and drama, which she blends so beautifully as Agnes. Can you speak a bit about working with her?

TURTLETAUB: Yes, she’s brilliant. She gets herself completely lost in a role. She’s wonderful in everything she does.

ADAMSON: Yes, exactly. She’s so unobtrusive about her acting career. When asked about her role in Puzzle she’s quoted as saying; “Just to get the script where I’m actually the star is quite something.” It’s refreshing that she has such modesty about her tremendous talent.

TURTLETAUB: Absolutely, I feel the same way. Every now and then, I meet someone who doesn’t recognize her name, and then when I mention the specific movie, they go oh, that’s Kelly Macdonald.

ADAMSON: I’ve heard you refer to Agnes as ‘a woman of a certain age.’ I can identify with that, and think we need to see more complex women characters ‘of a certain age’ on screen. Do you agree?

TURTLETAUB: Yes, I would agree, we do need more films about middle age.

TURTLETAUB: I hadn’t seen the original movie; I think it was in 2010 that Natalia Smirnoff had made the film in Argentina. So I was relieved of that weight, if you will, in the same way, that if you read a screenplay and you haven’t read the book, it’s the same thing. For me, Puzzle was what I saw in our script. I intentionally didn’t watch the other movie because I didn’t want to have my vision clouded by what someone else had interpreted even though it was a different script. Also, ours was an American script, not an Argentinian script. I didn’t watch Natalia’s movie until long after I finished this movie.

ADAMSON: And I assume you wanted your movie to stand on its own?

ADAMSON: Two of the films you produced stand out in my memory: Little Miss Sunshine, which is one of my favorite films, and Loving. The stories are quite different, but both champion characters who stand up for themselves and their loved ones. Is that an overall theme that you find compelling?

TURTLETAUB: Yeah, it’s all about people that interest me. Without sounding too pompous, we try to have stories with meaning, and the meaning could be as simple as when you think about Little Miss Sunshine about ‘do what you love’, and don’t worry about the consequences. Or it could be something that has a social meaning, like the movie Loving, which is about the first big interracial marriage in the South [USA] that changed the laws in the South and in many states across the country

TURTLETAUB: We try to make movies that have something to say, but they have to entertain, too. What I am pleased about with Puzzle, and we just went through a screening here, is that people are laughing continually and at the same time, they’re feeling human pathos. Those are the kind of stories that I love, where you both laugh and cry.