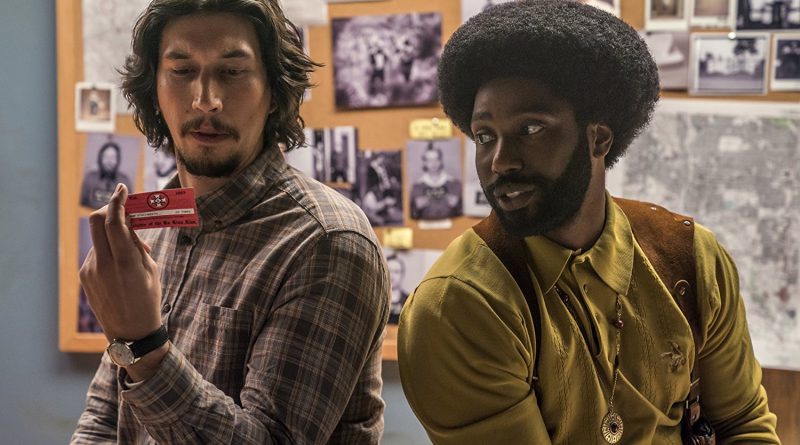 Director Spike Lee is not subtle in his approach to targeted topics, nor should he be when he’s tackling blatant racism, anti-Semitism, and sexism as he does in BlacKkKlansman. Using Ron Stallworth’s real-life experiences, Lee dynamically dramatizes the rise of the Black Power movement crosscut with the angry defensiveness of the local Ku Klux Klan, members call The Organization. Continue reading…

Colorado Springs’ first black police officer in the 1970s , Ron lobbies for more demanding work than the evidence/filing room. Despite the racism within his own department, expressed through micro and macro-aggressions, Ron works as an undercover detective infiltrating the Black Power movement beginning with Stokely Carmichael’s, aka Kwame Ture’s, incendiary speech. Boldly, the articulate, intelligent Stallworth initiates phone contact with the KKK leading to Jewish detective Flip Zimmerman pretending to be Ron. Flip rises through the ranks, though suspicions increase about his Jewishness by one hostile Klan member.

Spike Lee creates a tense environment punctuated with satirical, exaggerated humor and popular songs that comment explicitly on the action. More significantly, he begins with footage of the iconic, long zoom out on the injured Northern soldiers’ lying lined up on the ground from the 1939 Gone with the Wind ending on the Confederate Flag and clips from D.W. Griffith’s 1915 racist Birth of a Nation justifying the KKK’s origins. Fearlessly, blatantly he launches into a faux documentary for the Klan, asserting the most offensive, all too familiar racist, anti-Semitic invective, all echoing today’s bigotry. He never wavers from the repeated use of the n word, considerable cursing, and the KKK’s repulsive, in-your-face hatred. Lee connects it with recent events, including the August 2017 Charlottesville march and David Duke. His maneuver is as effective as it is upsetting.

John David Washington as Stallworth, Adam Driver as Flip, Laura Harrier as Patrice, and Topher Grace as David Duke are all solid. But Harry Belafonte as himself steals my heart in his scenes. Spike Lee, also co-writer, doesn’t mince words as he barrels to a jolting, tense conclusion. The most upsetting takeaway is that this is not past but current history. BlacKkKlansman won the Grand Prix at the prestigious Cannes Film Festival.