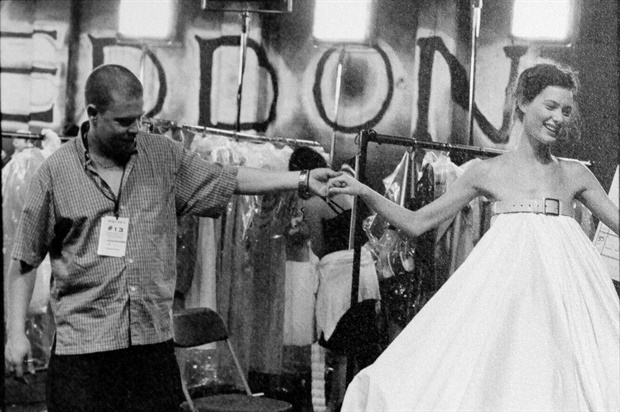 Fashion designers of haute couture possess a formidable drive and a fertile imagination. That certainly describes Lee Alexander McQueen whose name probably registers even with those of us buying off the rack. The documentary simply titled McQueen acquaints viewers in depth with the controversial, troubled man behind various labels for which he designed, including Givenchy, Gucci, and his own. Continue reading…

Through contemporary interviews and over 200 archival sources, directors Ian Bonhôte and Peter Ettedgui’s chronological presentation includes comments from designers (notably Sebastian Pons and boyfriend/assistant Andrew Groves), models (Jodie Kidd, in particular), stylists, nephew Gary, sister Janet and mother Joyce. The portrait that emerges is of a working-class boy from Scotland who, through overwhelming self-confidence, initially bulldozed his way into jobs, always succeeding because of his obsessive commitment and talent, despite subversive, iconoclastic designs. McQueen was always drawing clothes from his youngest days and, it is reported, could draft a jacket freehand, without measurements.

McQueen defines his guiding principle, one the filmmakers embraced: “If you don’t feel emotion, I’m not doing my job properly.” McQueen demanded people react to his shows, even repulsion or shock. In fact, McQueen prompted intense, negative reactions to his 1995 Highland Rape show, his 1999 No. 13, his 2001 Voss, and his 2009 Plato’s Atlantis, among others. Daring to look outrageous, he was attacked as and certainly appeared misogynistic and tasteless. After his suicide by hanging in 2010 at the age of 40, New York’s Metropolitan Museum’s 2011 retrospective Savage Beauty broke records as it did in 2015 at London’s Victoria & Albert Museum. Shocking grabs attention.

In just under two hours, the film McQueen divides into five chapters announced on screen as Tape sections. The style complements McQueen’s; as dear friend Isabella Blow describes him, sabotage and tradition. Shots seldom last more than a few seconds, music pumps up the emotion, and flashy camerawork dominates, all of this complementing a tribute to what is really McQueen’s performance art. For me he crosses the line into indelicate, provocative territory, while the film McQueen takes a more nonjudgmental approach, allowing viewers to decide for themselves.