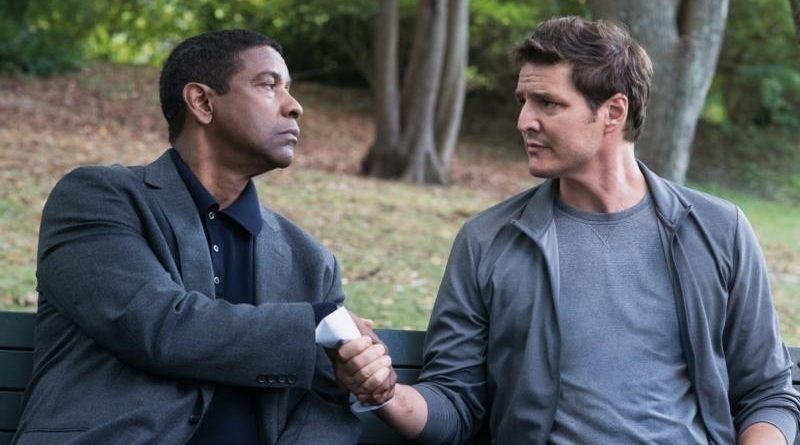 It’s been more than 20 years since the TV series The Equalizer (1985-1989) made its debut opposite Denzel Washington’s popular St. Elsewhere. Now Denzel has become shadowy Robert McCall, the ex-CIA Black Ops assassin-turned-vigilante. In the 2014 Equalizer, righteous McCall was a grieving widower determined to wreak vengeance for a victimized teenage prostitute (Chloe Grace Moretz). Now he’s back, working in Boston as a laconic Lyft driver who, when his passengers are in danger, comes to their aid. Like when some spoiled, rich kids get their kicks by drugging and raping a defenseless woman. McCall brutally slices one with his own credit cards, muttering, “I expect a five-star rating.” Continue reading…

Then there’s Sam (Orson Bean), a Yiddish-speaking Holocaust survivor who wants to recover a painting stolen from his family by the Nazis.

But McCall’s bigger worry concerns young Miles (Ashton Sanders), an aspiring artist considering joining a street gang. He lives in the same apartment complex as McCall, who gives him a copy of Ta-Nehisi Coates’ Between the World and Me and hires him to re-paint a defaced mural instead.

McCall has remained close to Susan Plummer (Melissa Leo), his former CIA handler who, aside from her husband Brian (Bill Pullman), is the only person who knows he’s still alive.

When Susan goes to Brussels with colleague Dave York (Pedro Pascal), she meets her untimely demise. That catapults McCall into action, since he’s obviously the next target on the hit list of a bunch of bad guys, culminating in a climactic fight during a Category 5 hurricane in coastal Massachusetts.

Adapted by Richard Wenk and directed by Antoine Fuqua, this cliché-cluttered, avenging hero melodrama is the first sequel of both Washington and Fuqua’s long, productive careers. Too had that it’s so fragmented with subplots, making it emerge as unfocused, filled with unnecessarily sadistic violence.

On the Granger Movie Gauge of 1 to 10, The Equalizer 2 is a ponderously contrived 5, but both Denzel Washington and Antoine Fuqua are considering a threquel.