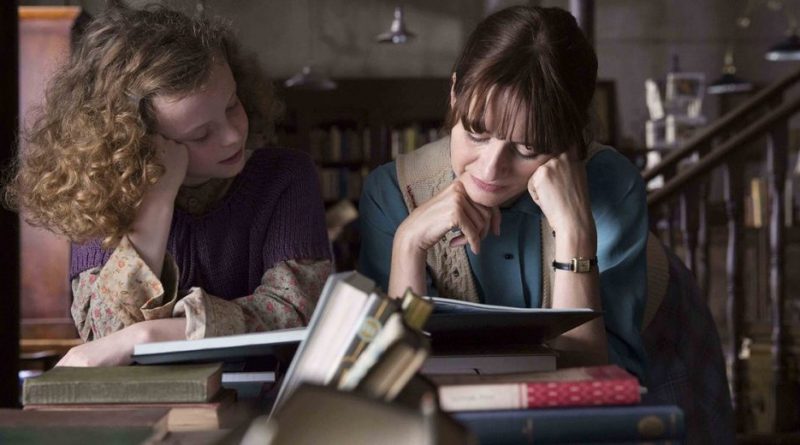 In 1950s Britain, a widow moves to a small English village, buys a old house in town that had stood empty for years, with the intention to open a bookshop. Sounds harmless enough, maybe even something the village would welcome. But Florence Green (Emily Mortimer) does not find it so. It isn’t so much the bookshop that is the problem, although one seemly friendly villager offers her the not-to-encouraging advice that people around there don’t read. Well, the villager admits, there is one reader, the reclusive Mr. Brundish (Bill Nighy) but he never leaves his decaying mansion. No, the real problem,as it turns out, is not lack of readers, but that Florence happened to pick as the spot for her bookshop the very old house that a powerful local aristocrat Violet Gamat (Patricia Clarkson) had her eye on, planning to turn the building that everyone in town calls “the old house” into an “arts center.”

It sets in motion a contest of wills between the plucky widow and the ruthless aristocrat, that sounds very British and indeed the film is based on Penelope Fitzgerald’s semi-autobiographical novel. But the direction and screen adaptation by Catalan director Isabel Coixet brings another element into this story, taking it down some darker and unexpected paths. Class differences and the insular nature of small towns are topics that are woven into this literary tale.

The acting is excellent with Emily Mortimer getting a chance to really shine as the widow determined to stay and make her bookshop succeed. Despite the lack of encouragement, the bookshop does well, bringing novels like “Fahrenheit 451” and “Lolita” to the village. Bill Nighy, as always, turns in a fine performance as the book-loving Mr. Brundish, who becomes Florence’s friend, her best ally and customer. The other villagers, while friendly on the surface, are harder to read, particularly a local BBC producer Milo North, a flippant, flirtatious fellow but in an oily way. A local family sends their young daughter Christine to help in the shop, and the girl and the shop owner bond over tea and books, even though she says she prefers math to reading.

Everything is low-key and emotionally restrained but the director interjects an element of Kafka and some bone-chilling twists, making this film far more interesting than the post-war historical setting suggests.