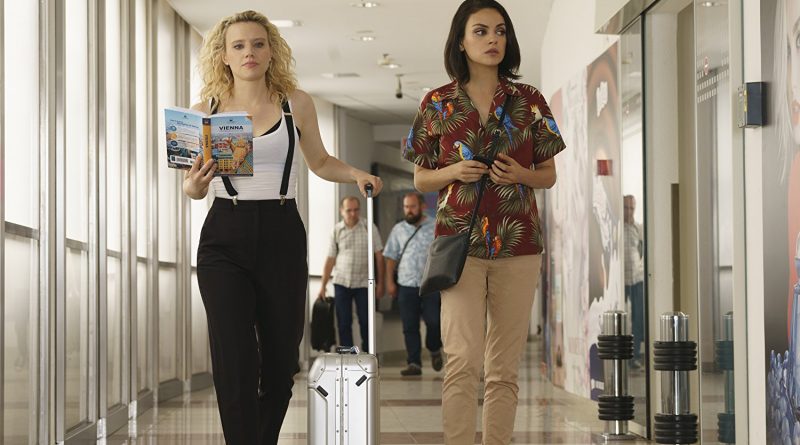 I really enjoy supporting women writers/directors, which is perhaps why I was a bit disappointed by Susanna Fogel’s buddy-comedy caper which, unfortunately, wastes the prodigious talent of SNL’s Kate McKinnon. In the midst of a shootout at an open air market in Vilnius, Lithuania, halfway across the world in Los Angeles, Audrey (Mila Kunis) is celebrating her 30th birthday, having just been dumped – via text – by one of the gunmen, Drew (Justin Theroux). He’s a C.I.A. agent and he doesn’t want to place Audrey in danger.

That’s the set-up. While Audrey seeks solace with her roommate/BFF Morgan (Kate McKinnon), Drew suddenly crashes through her apartment window, explaining that the fate of the free world depends on delivering a cheap, plastic 2nd place football trophy (containing a USB drive) to a contact at a café in Vienna. Then he’s killed – well, supposedly.

It’s obvious that stunt doubles did the challenging stuff, like when McKinnon fights a villain while dangling on a trapeze 50’ in the air. And – plot-wise, how did Drew come back to life – after Audrey checked his pulse to confirm he was dead?

On the Granger Movie Gauge of 1 to 10, “The Spy Who Dumped Me” is a silly 6, a screwball spoof that’s salvaged only by the sarcastic sincerity Kate McKinnon’s skewering MI6’s icy chief (Gillian Anderson).