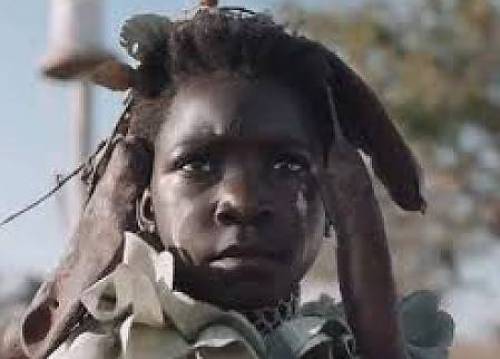 The words “witch hunt” have been tossed about with reckless abandon of late. The phrase stuck in my head as I was drawn into the sometimes-mystifying, often-amusing spell cast by I Am Not a Witch — England’s entry to compete for best foreign-language film at the 2018 Oscars, even though a goodly portion of the dialogue is in English. The feature debut of Welsh director-writer Rungano Nyoni, a Zambian native, who studied actual witch camps in Ghana and her birth country, is part social satire and part fairy tale while being highly watchable. While the director tends to leapfrog into new scenes without transitions and makes a few off-key choices – why use Vivaldi’s The Four Seasons as background music – there are many more unexpected choices that are welcome.

Nyoni embellishes reality somewhat as a quiet pre-teen girl (Maggie Mulubwa, whose big, round saucer eyes fill in most of the blanks in her performance), oddly attired in a T-shirt bearing the slogan “bootycall,” is accused of being a budding sorceress when she happens to be nearby a woman after she trips and spills the bucket of water she was carrying on her head. The youngster is taken to the authorities, declared a witch and subsequently placed in a camp of full of adult females. She tries to run away but is quickly tethered to a customary large spool of ribbon that is similarly attached to each witch and she is told that if she cuts it, she will turn into a goat. One grandmotherly woman names her “Shula” – which, we are told, means “uprooted” — and many of the other women grow protective of her.

It soon becomes apparent that “witch” is just another name for slave, as residents of the camp are forced to work in almost fallow fields where they are subjected to dirt-scorching heat. But the well-off Mr. Banda (comedian Henry BJ Phiri), who oversees the camp, is fond of the girl – especially after she supposedly uses her “powers” to pick out a thief in a line of suspects. He takes her home to meet his wife, who is a witch herself. The couple is childless and one can sense that he is compensating by bringing Shula home. But he also exploits her youth, taking her on a TV talk show to hawk “Shula eggs” from chickens and using her “powers” to bring about much-needed rain to the parched region.

It is somewhat refreshing that Nyoni doesn’t spell everything out for us. It is clear when Shula is upset, happy or defiant without having to underline her every emotion. It also allows viewers to divine their own thoughts about how every culture looks for scapegoats to blame and how females in particular are suspect because of their effect on men or are a threat to women in a position of power that they jealously want to guard. As I watched I Am Not a Witch, flashes of A Little Princess, Beasts of the Southern Wild and The Gods Must Be Crazy ran through my head. And that’s pretty good company.