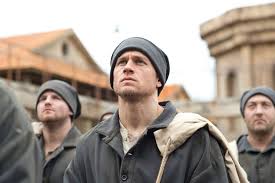 If you saw Franklin Schaffner’s 1973 Steve McQueen/Dustin Hoffman adaptation of Henri Charriere’s best-selling autobiographical books (“Papillon” & “Banco”), you’d feel acute disappointment within the first 10 minutes of this decidedly mediocre version. In Paris in the early 1930s, Henri Charrier (Charlie Hunan) is a reckless safecracker who’s framed for murder and shipped off to a the notorious penal colony on the remote island of French Guiana, located on the north Atlantic coast of South America. It was established by the French emperor Napoleon III in 1852.

According to historical records, more than 80,000 of the men imprisoned there were never seen again. Escape from the rocky, palm-covered, disease-infested island was considered impossible, since the surrounding sea was infested with piranhas and sharks.

Based on Charriere’s grim memoirs and the Dalton Trumbo/Lorenzo Sample Jr. screenplay, it’s been adapted by Aaron Guzikowski and helmed by Danish director Michael Noer with the two leading roles re-created by actors most recognizable from TV: Charlie Hunnam (“Sons of Anarchy”) and Rami Malek (“Mr. Robot”).

Despite suffering the starvation diet and lack of medical/dental care, Hunnam’s teeth remain sparkling bright, his body perfectly toned and his haircut barbershop-fresh. That inconsistency is almost laughable.

FYI: After 1938, the government of France stopped sending prisoners there and, in 1952, the prison was closed permanently. At present, the Salvation Islands (Isles du Salut) – of which Devil’s Island is a part – is used for studying space launches. More than 50,000 tourists visit annually to walk through the prison grounds.

On the Granger Movie Gauge of 1 to 10, Papillon falls flat with a 4. For real drama, see the original.