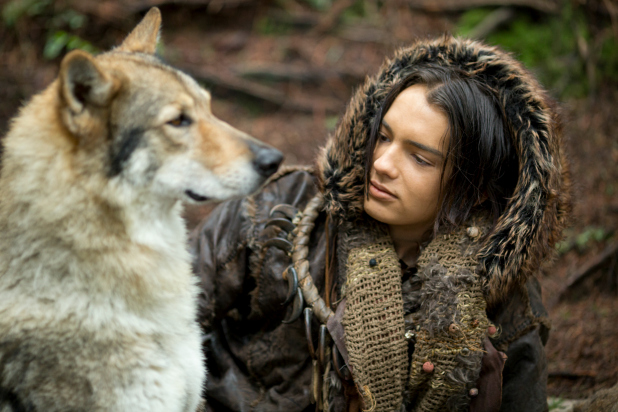 Set in Europe more than 20,000 years ago during the last Ice Age, this is an ‘origin’ fable about how a caveman first bonded with a wolf. Preparing for the annual Great Hunt, Chief Tau (Johannes Haukur Johannesson) is particularly concerned about his sensitive teenage son, Keda (Kodi Smit-McPhee), who hasn’t quite mastered all the necessary skills. As his mother Rho (Natassia Malthe) says, “Keda leads with his heart, not his spear.”

Joining other tribesmen, they stampede a bison herd, driving them over a cliff. The carcasses will be butchered and hauled back as food for the winter.

But one beast turns back to rush his attackers, catching Keda on its horns and tossing him into the air. Knocked unconscious, Keda lands on a narrow ledge that’s too steep for a rescue.

When Keda regains consciousness, there’s a flash flood, enabling him to swim to safety, only to be attacked by voracious wolves.

After stabbing the leader of the pack, dubbed Alpha, Keda takes pity on the injured animal. Carefully binding its jaws, Keda nurses Alpha’s wound with maggots. Then he offers a bowl of water. Yet, when he kills and eats a rabbit, Keda firmly establishes dominance, insisting, “You have to wait your turn.”

Wandering through the vast wilderness, Keda and Alpha encounter many perils and predators, becoming co-dependent as they trek home through blizzards, relying on Keda’s hand tattoo of the Big Dipper constellation to point them in the right direction.

FYI: Alpha is a Czechoslovakian wolfdog. And don’t look for a “no animals were harmed during the making of this film” tag because – for the skinning/hide-removal scene – four bison were ‘dispatched humanely’ by Longview Beef Jerky staff.