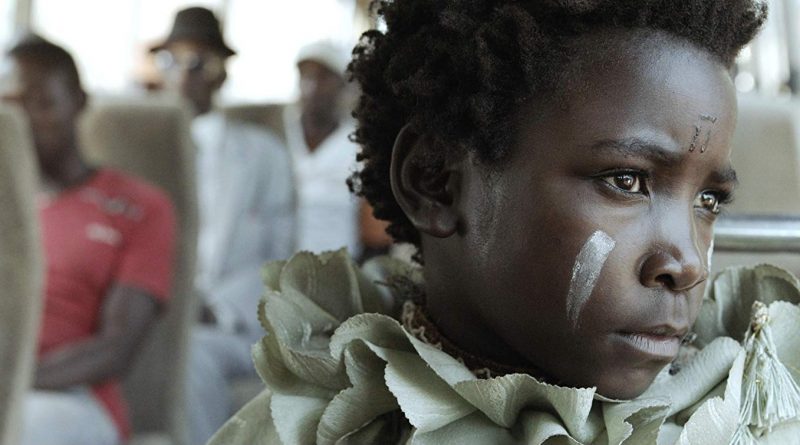 Rungano Nyoni‘s utterly captivating debut feature I Am Not a Witch centers on 8-year-old Shula (Maggie Mulubwa), a young Zambian girl who’s quickly accused of witchcraft after she shows up in a small village unannounced. A token trial follows; Shula is found guilty and sent to live in a barren, government-run witch camp, where she — like the other women interned there — is always tethered to a large, heavy spool of ribbon, to prevent her from flying off and (presumably) killing someone. 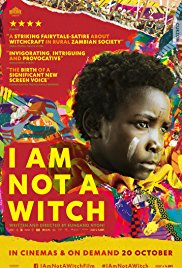 Once Shula decides to opt in on her new status as a witch — her other choice, according to those in charge, is to cut the ribbon and be turned into a goat — she’s embraced by the older women in the camp, who dote on her like a daughter/granddaughter. The affection and attention are nice, as is the status Shula earns when she’s taken to judge civil disputes and her decisions are taken seriously. But she must also face scorn, hostility, and disgust from the locals (and intrusive curiosity from visiting tourists), which ultimately outweigh the positive aspects of the witches’ community.

Viewed by Nyoni as a fairy tale, I Am Not a Witch nevertheless is based on the existence of actual witch camps in Africa; Nyoni, who was born in Zambia before moving to Wales as a young child, stayed in one in Ghana for a month that has been operating for more than 200 years. It’s clear that her research informed the film, which is richly observed and beautifully detailed.

It’s also gorgeously filmed and full of realistic, lived-in performances, especially Mulubwa’s; her Shula is simultaneously defiant and vulnerable — every inch an old soul in a young body. I Am Not a Witch raises compelling questions about superstition and fear of “the other” and how they can lead to women being blamed for misfortune even in societies that value women and in many ways view them as equal to men. — Betsy Bozdech

Nell Minow: Writer/director Rungano Nyoni makes a impressive debut in the Zambia-set story of a young girl (Maggie Mulubwa) accused of being a witch. The mingled fear and casual acceptance of the “witches” by the community, which uses them as forced labor and tourist attractions is explored with striking images and an intimate, documentary-style tone, often most eloquent when it is just a close-up of Maggie Mulubwa’s face.

MaryAnn Johanson Rungano Nyoni’s I Am Not a Witch surely must be one of the most remarkable feature debuts of a writer-director in recent memory. This is an absolutely stunning mix of fantasy, social commentary, and cultural metaphor, full of striking imagery, an astonishing mix of horror and sly humor, and sheer thematic audacity. I am beyond delighted that BAFTA, the British film academy, has chosen the movie as Britain’s official entry for Best Foreign Language Film at the upcoming Oscars: it’s a marvelous stamp of approval for an unique and truly original filmmaking voice, one who brings a perspective — African, female, feminist — that has been sorely lacking onscreen. I cannot wait to see what Nyoni comes up with next.

Susan Wloszczyna: It is refreshing that Rungano Nyoni doesn’t spell everything out for us. It is clear when Shula is upset, happy or defiant without having to underline her every emotion. It also allows viewers to divine their own thoughts about how every culture looks for scapegoats to blame and how females in particular are suspect because of their effect on men or are a threat to women in a position of power that they jealously want to guard. As I watched I Am Not a Witch, flashes of A Little Princess, Beasts of the Southern Wild and The Gods Must Be Crazy ran through my head. And that’s pretty good company. Read full review.

Marilyn Ferdinand: In first-world Western countries, the formerly dreaded figure of the witch has been mainstreamed as a spiritual practice of choice or fodder for the entertainment industry. First-time director Rugano Nyoni has made an entertaining film about witches in I Am Not a Witch, but one with a razor-sharp edge. In rural Zambia, a young girl (Maggie Mulubwa), probably an orphan, is accused of witchcraft for staring at a woman who falls while carrying a jug of water and does not deny it. She is shipped off to a camp for witches, where she is named Shula and initiated into the life—tethered to a long spool of ribbon, forced to work on area farms as a slave, displayed for tourists, and given the responsibility for bringing rain and judging criminal trials. Those accustomed to viewing other cultures through the noble images of National Geographic spreads will be confronted with petty corruption, unreasonable tribal queens, blatant prejudice, and superstitious ignorance in this farcical drama. They will also be surprisingly moved by the plight of the irresistible Mulubwa, a blank slate who had no voice to utter the words that form the title of this fascinating film but who enables other women to find theirs.

Sandie Angulo Chen: I Am Not a Witch is an arresting exploration of gender, superstition, and identity wrapped up in a magical realist ribbon. At times darkly comedic and other times downright heartbreaking, up-and-coming writer-director Rungano Nyoni’s first feature is a bold statement on the lack of power girls and women have once they’ve been accused of something sinister – in this case of literally being witches in a small African village. Eight-year-old Shula’s (the expressive Maggie Mulubwa) proximity to an unfortunate event causes the community to denounce her as a witch and turn her in to the authorities. She’s tied to a ribbon (to keep her and other witches from flying away) and kept in a witches’ camp with her “own” kind. Later she’s exploited by an opportunistic government official who’d rather charge folks for Shula’s so-called powers than truly help her. It’s a beautifully shot film, and it’s impossible to look away from Shula’s disturbing circumstances. Nyoni is definitely a filmmaker to watch.

Nikki Baughan: Ancient tradition and modern capitalism collide in this striking, and strikingly confident, debut feature from Zambian-Welsh filmmaker Rungano Nyoni, who draws on her dual background to craft a tale rich in murky superstition and clear-eyed social commentary. It is set in the small communities around Zambia’s capital Lusaka, whose inhabitants wear modern clothes, listen to Western music and place great faith in old ideas of spirits and witchcraft. Read full review.

Jennifer Merin I Am Not A Witch is the beautifully crafted and profoundly provocative first feature from writer/director Rungaro Nyoni, who was born in Zambia but moved at a young age to Wales. The fascinating story she tells in the film is based on her personal observations and extensive research on witchcraft superstitions and the treatment of those accused of witchcraft in Zambia and Ghana. A rich mix of smartly entertaining satire and sharp social commentary, the film tells the tale of Shula, a young Zambian girl accused of witchcraft, found guilty, considered to be property of the state and subjected to disturbing exploitation. I Am Not A Witch was shot in an actual witch camp that has been in existence for some 400 years. Nyoni’s choice to cast local people in the film gives the fantasy-like scenario a feeling of alarming authenticity. Masterfully bewitching storytelling, superb performances, exquisite cinematography and outstanding editing skills have brought I Am Not A Witch into contention for Oscar gold as Britain’s submission for best foreign film. I Am Not A Witch is a must see. Read full review.

Esther Iverem: In following the story of young girl named Shula, I Am Not A Witch is visually fascinating as well as revealing about those who are considered to delve in supernatural powers in Zambia. But as it explores such a complex cultural issue, it is unable to maintain a continuity in tone between comedy and the gravity and grave consequences of child abuse. Such a treatment of African culture results in dialogue that feels unnatural and in characters robbed of much of their humanity.

Cate Marquis I Am Not A Witch is a sad and striking film, told with dignity and visual grace, about a little girl, Shula, accused of being a witch by the people in her rural village. Director Rungano Nyoni’s debut feature spotlights Zambian superstitions about witches but it goes further to peel back layers of corruption and exploitation that makes the belief in witches useful to some people. To accomplish this, the director focuses not on someone who fits the stereotypical vision of a witch but a innocent young girl lost in this world. Read full review.

Title: I Am Not A Witch