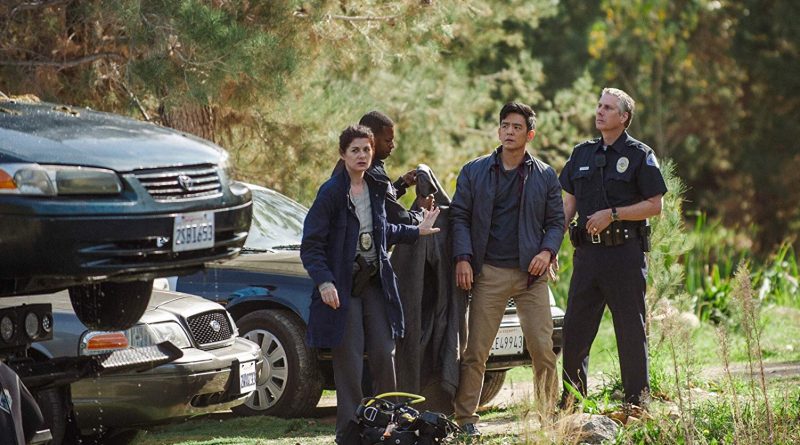 Reminiscent of Alfred Hitchcock mysteries, this is a cool, computer-centric, psychological thriller, detailing how a distraught father attempts to find his missing Millennial daughter. As shown in a photographic montage, the Kim family of San Jose, California, has always been close, even when terminal cancer takes Pamela (Sara Sohn), leaving David (John Cho) a widower raising 16 year-old Margot (Michelle La).

When she doesn’t come home one night after supposedly attending a study group and skips school the next day, David realizes he’s missed Margot’s calls and she doesn’t pick up when he returns them.

That’s when he contacts the police. Detective Rosemary Vick (Debra Messing) is quick to respond, but there are no clues to follow.

Increasingly desperate yet determined, David delves into his daughter’s laptop, where all her secrets are kept. Step-by-step, he traces her digital footprints, hoping she won’t disappear forever. That leads him though her e-mails, YouTube videos and into Facebook, Instagram, Tumblr, even her bank account.

When David calls her so-called ‘friends,’ asking when they last saw her, he realizes how socially isolated she’s become, joining a sinister site called YouCast, communicating with strangers on-line.

And kudos to editors Will Merrick and Nick Johnson for evoking urgency, delineating just how technology has become an integral part of our lives – for better or worse.

On the Granger Movie Gauge of 1 to 10, Searching is an ingenious, innovative 8. You won’t be able to log off.