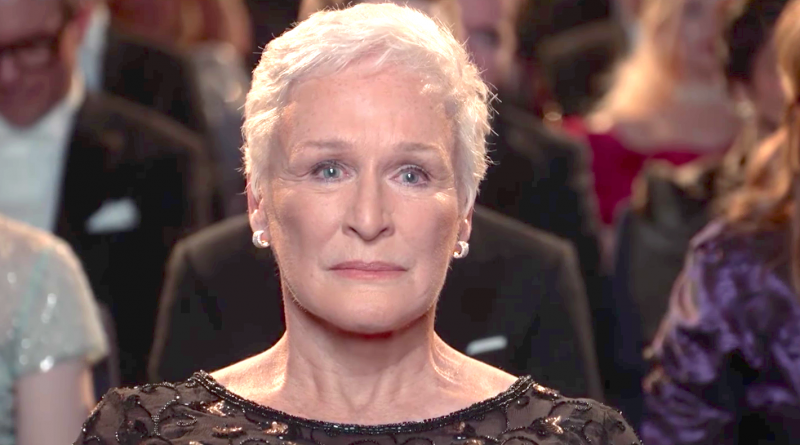 Six-time Academy Award nominee Glenn Close opens the Oscar race with a stunning portrayal of a long-suffering woman who’s fed up with standing in her celebrated husband’s shadow.

Her symbiotic story begins with the Castlemans in bed. Joan (Glenn Close) and her husband Joe (Jonathan Pryce) are eagerly awaiting an early morning phone call that confirms he’s won the 1992 Nobel Prize for Literature.

En route to the ceremony in Sweden, Joan recalls (in flashbacks) their road from Smith College to Stockholm.

In the late 1950s, she was an extraordinarily promising creative writing student who had an affair with pompous, philandering English Lit Professor Joe Castleman. And it was only after they were married that Joe’s distinguished career took off.

As Joan listens with a tight-lipped smile to people extolling Joe for reinventing the nature of storytelling, you can see her inscrutable face barely reflecting perceptible pride mixed with resentful bitterness, disbelief tinged by jealousy. Glenn Close’s nuanced performance is close to miraculous in its subtlety.

When asked what she does, placid Joan enigmatically replies, “I am a kingmaker.”

“Don’t paint me as a victim,” she warns him. “I am much more interesting than that.” Indeed. She has sublimated her own ambitions to surreptitiously further his.

On the Granger Movie Gauge of 1 to 10, “The Wife” is a self-effacing, enabling 8. Glenn Close’s 7th nomination may be the charm.