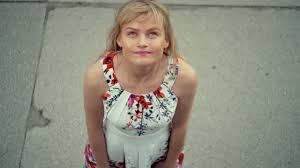 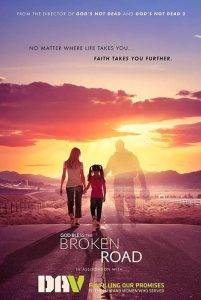 Over many decades filmmakers have brought us significant stories about wars and the effects they have on our lives. Along with Hacksaw Ridge, Free Sate of Jones, Megan Leavey, 12 Strong, Dunkirk, and more is God Bless The Broken Road.

It’s a true story about Amber Hill (Lindsay Pulsipher), a young mother who loves her church, and enjoys playing her guitar and singing on Sundays. When two Military men approach her she sinks to the ground screaming knowing they are there to inform her that husband was killed in action of war in Afghanistan.

Not only is she unable to process the news; her young daughter Bree Hill (Makenzie Moss) and his mother Patti Hill (Kim Delaney) also are mourning their loss. Things get even worse for Amber when she can’t keep up with her bills.

Many want to do all they can for her family. Lucky for Amber there is a stock car racing track in town run by Joe Cartier (Gary Grubbs). He makes a small track for kids to ride in little go-carts. It works for Bree who loves to drive one, and it takes her mind off her loss. Moss is an incredible young girl whose performance in this film will certainly launch her career in films.

Amber continually is faced with one setback after another and one that makes her unable to fix it and doubting her faith. Patti tries to help but Amber is mad at the world and the two are constantly stressed especially when it’s about Bree.

When Cody Jackson (Andrew Walker), a new racer comes to work for Joe he is immediately wanting to know more about Amber and takes to Bree like a bee to honey. Joe tries to guide Cody in his racing, but like many racers they have to push their luck.

The entire cast delivers characters that we can identify with and care for. All are good including a surprise role by LaDainian Tomlinson as the Pastor, and considered by many to be the NFL’s most valuable player. This was a nice surprise to those in San Diego who saw the movie. But little Makenzie Moss is terrific and steals every scene she’s in.

It’s always interesting when some slam any movies about faith. Maybe it just scares them. The true story of God Bless The Broken Road speaks to the elements of life we face every day especially about those in the Military who serve to preserve our lives.

Thanks to the direction by Harold Cronk, and screenwriters Cronk, Jennifer Dornbush and story by Andy Fraser and Liam Matthews this is a film that will touch all who see it.

Also in this film is Micah Tyler who played himself. He is also an incredible musician of Faith and county music. Check out his heart-filled You Tube page, https://tinyurl.com/y9v5wtjq

God Bless The Broken Road
Studio: Freestyle Digital Media
Runtime: 113 minutes
MPAA Rating: PG- for thematic elements and some combat action
Our Rating: A+
Who Should Go: Everyone who enjoys fun and true inspiring well-made films.