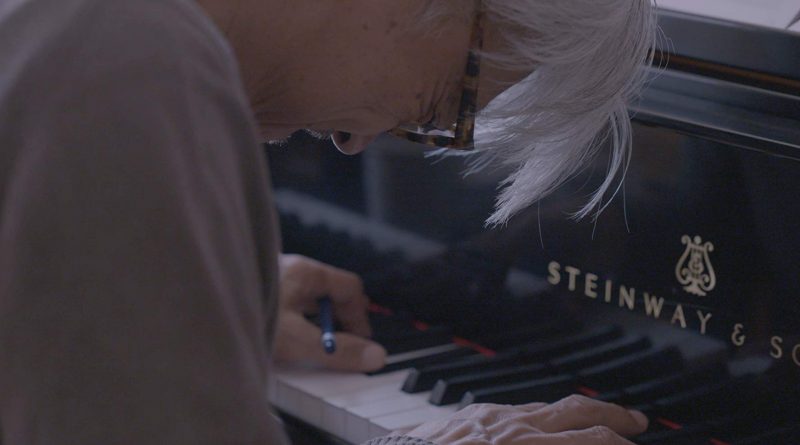 Ryuichi Sakamoto: Coda profiles this talented, humble composer. Some rare, wonderful individuals have the gift of modeling ways to approach life and persevere in the face of illness. One of those amazing people is Ryuichi Sakamoto, an award-winning Japanese musician and an environmental activist. In the documentary tribute to him, Ryuichi Sakamoto: Coda, director Stephen Nomura Schible captures his spirit, his art, and his inspirational approach to society.

The film begins with Sakamoto lovingly examining a piano that survived the 2011 tsunami that devastated Fukushima, Japan, where nuclear disaster followed at the power plants. Sakamoto became an anti-nuclear activist but he is known more generally for his musical compositions, his acting, and love of nature. In fact, he blends sounds of wind, water, and more into some of his music.

Sakamoto’s musical talent extends to film work that began when he was cast in Merry Christmas Mr. Lawrence in 1983. He told director Nagisa Oshima he’d act in it only if he could also compose the score. Sakamoto would go on to win an Academy Award winner for Best Original Score, with David Byrne and Cong Su, for The Last Emperor, 1987. One of the gifts of this lovely portrait of Sakamoto is listening to snippets of his music for those films, plus The Revenant, Sheltering Sky, and Solaris.

But the primary appeal of Ryuichi Sakamoto: Coda comes from following this humble, quiet man as he reminisces, composes, and contemplates nature. He talks about the appeal of the piano forced into its shape and its sound that attenuates and disappears. Meantime he’s fascinated by the idea of perpetual sound as a metaphor for eternity. It is in this vein that he considers monumental questions; for example, wanting to explore where we came from he travels to Northern Kenya. Best of all, he invites us to share his thoughts, his sensitivity, and his hope in this calm, restrained and thoroughly appealing profile.