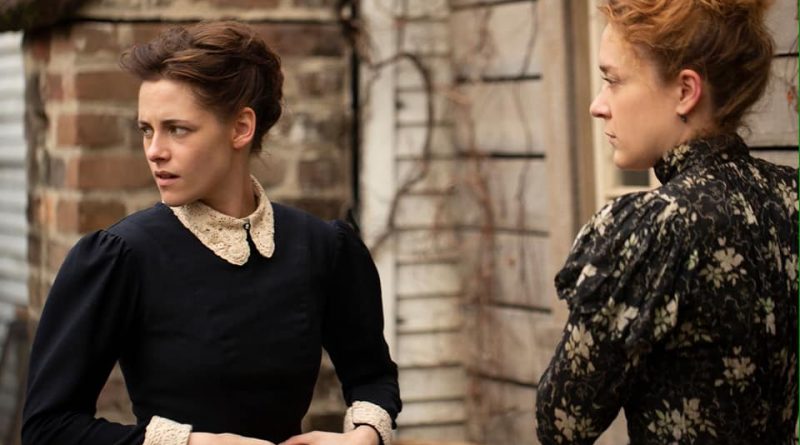 Lizzie resurrects an old axe murder mystery. The year is 1892. The murder: Mr. and Mrs. Borden. The suspect: Lizzie. If this movie were just the unspooling of a Victorian axe murder, it would still balance merit with demerits, but as it’s based on a real murder, Lizzie takes on an element of history beyond the psychological thriller.

The story begins in medias res as Lizzie Borden, one of wealthy Alexander Borden’s two daughters, finds her father axed. She screams for Bridget, the servant, to call the police. Then they find Abby Borden, Lizzie and Emma’s icy step-mother, also axed.

Lizzie is interrogated. So is Bridget. The film flashes back to six months earlier to lay out the whys and wherefores. Part of the whys include the reprehensible Mr. Borden, a real estate developer with no morals, not with land grabs or servant grabs. He is scheming to withhold his daughters’ inheritance.

Lizzie, despite her fits, is a woman with a will — and a wise crack. When her father calls her an abomination, she retorts with, “We’re on equal footing, father.” She does not like being constrained by corsets or mores. What she does like is Bridget, who becomes her friend in what used to be labeled in convents as a “particular friendship.”

And this is where writer Bryce Kass’ screenplay raises eyebrows. Why the “lezzie” aspects introduced into the Lizzie story? Why the female nudity and make-out sessions? Do they instruct — or intrude?

Director Craig William Macneill exploits camera angles, especially in overhead shots; he adds style to mirrors and to lighting, especially with candles or reflections on the wooden table.

Chloë Sevigny does excellent work as Lizzie, whether bold or abashed. Kristen Stewart balances her as Bridget. Fiona Shaw is noteworthy as Abby and Denis O’Hare as the feckless Borden brother.

Lizzie offers much to look at as a film. But one has to wonder what it is about the Borden murders, versus others without legend and song that continues to tingle the imagination.