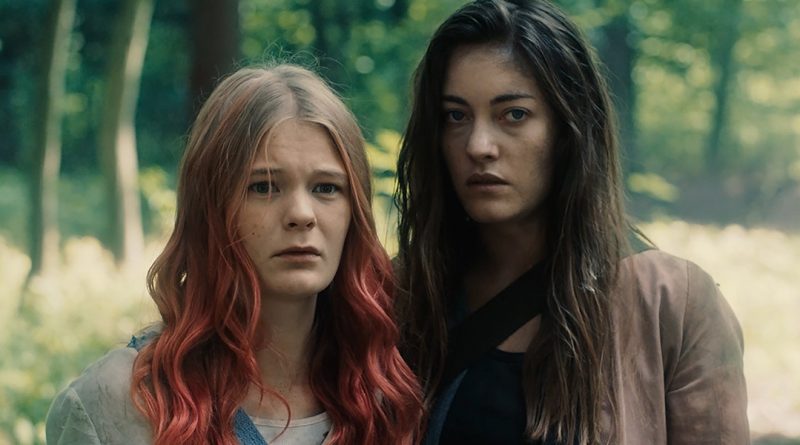 A girls’ own adventure tale for the darkly inclined, Endzeit – Ever After had its world premiere at the 2018 Toronto International Film Festival and is the German feminist zombie film we didn’t even know we needed until it came along. For a subgenre that risks almost constant threat of cliché and tiresome repetition, in recent years a number of stand-out entries to the zombie category have demonstrated just how forceful the trope is to powerfully communicate the endurance and strength of women who band together. While Colm McCarthy’s 2016 British movie The Girl With All the Gifts raised the bar for how this subgenre can speak in urgent and meaningful ways to contemporary gender politics, Endzeit – Ever After proves it is still a rich terrain for filmmakers wanting to explore questions around women and survival.

The film begins two years after a zombie apocalypse has wiped out the majority of human life on Earth, with only two German cities surviving: while the residents of Jena search for a cure, in Weimar – where the film begins – anyone infected with the zombie virus is immediately killed. With residents forbidden to leave either city, desperation forces two very different young women called Vivi (Gro Swantje Kohlhof) and Eva (Maja Lehrer) together to take on the dangers that await beyond their supposed safe haven in Weimar.
Masterfully directed by Carolina Hellsgård, aside from its almost all woman-cast, the majority of the film’s central behind-the-scenes roles are also helmed by women in areas such as editing, cinematography, producing, score composition, screenwriting, and production design. It is therefore perhaps unsurprising that the film does not shy away from its subtext, and one of the film’s most striking achievements is how it so confidently blends its moody, atmospheric fantasy world with its often-explicit politics. Endzeit – Ever After makes it very clear that the zombie apocalypse is the result of the patriarchal status quo that stands in direct opposition to the feminized, natural environment. As Eva says at one point, “I think the Earth is a wise old lady, and humans haven’t paid her any rent for too long, and out there, that’s our eviction order”

With her not unsubtle similarities to Lara Croft, Eva stands in strong opposition to the fragile, emotionally unstable Vivi who, with her designer hair and chic pussy-bow blouse, reveals through her wardrobe alone how thoroughly unprepared she is for the realities that she must ultimately come to terms with in this radically different and violent new world.

Vivi’s trauma has found her institutionalized and drugged in what Eva calls a “mad house”, but as things in Weimar get desperate she is sent to “The Fence”, the boundary that surrounds the city that protects them from incoming zombie attacks. Circumstances arise only moments after their first meeting that make it essential for Eva and Vivi to flee Weimar in the hope of getting to Jena, and they escape on the driverless train that sends supplies between the two cities. When it breaks down, they find themselves stranded in a zombie-infested wilderness where the lack of civilization has let nature run riot.

At first, Eva has no interest in taking Vivi with her, but as time develops they slowly reveal their backstories: riddled with guilt, each woman’s survival was dependent on their sacrificing of others, in Vivi’s case her own younger sister. Despite the fantastic aspect of the circumstances that unite them, Vivi and Eva are both physically and emotionally brought together by distinctly of-this-world social gestures as they share a set of headphones to listen to music.

A highlight of TIFF’s Discovery program this year, Endzeit – Ever After both within the film itself and its production context typify the ambitions of the festival’s Share Her Journey movement, focused on amplifying and celebrating the role of women in film. Endzeit – Ever After is a radical reimagining of the eco-horror film where the zombie virus can be reconfigured as a blessing, not a curse – a way for Mother Nature to potentially usurp the patriarchal status quo in a meaningful, long-term and productive way.
The film holds at its heart the unseen potential of a feminist utopia and is thus is surely one of the most empowering and optimistic zombie films ever made. Endzeit – Ever After speaks through the poetry of horror of discovering alternate ways to survive in desperate, failing systems.