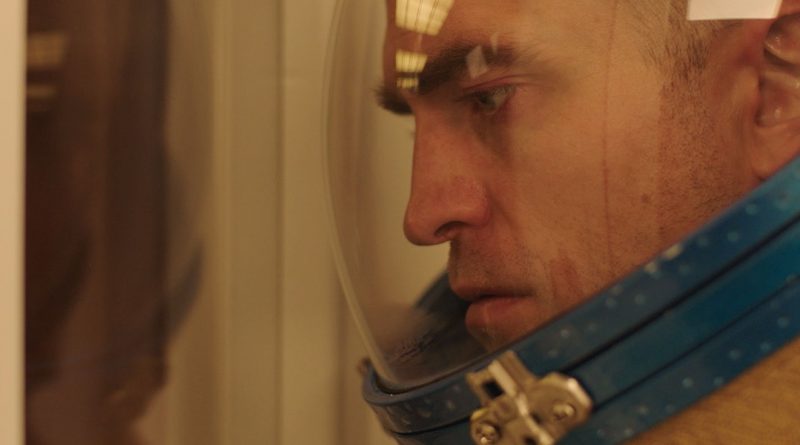 With all the spectacular SFX majesty that has dominated the representation of space across the science fiction genre, that Claire Denis’s High Life begins less fascinated with its cosmic surroundings than the ‘spectacle’ of a single working dad sets the tone in many ways for her first English-language feature.

The father Monte is played by Robert Pattinson, introduced as he makes repairs on his spacecraft’s external surfaces while cooing and soothing a baby inside the ship through a headset underneath his helmet. From the outset, the minutia of everyday parenting is defamiliarized: on Earth, settling a crying baby and toilet training are so ubiquitous for parents (predominantly mothers) as to be almost invisible. But here, amongst the stars, they are suddenly rendered fascinating and strange.

Added to this of course is the fact that here, the sole task of parenting is the responsibility of a man, not – as on Earth – assumed to be the work of women. Pattinson’s performance as his daughter grows older across the film as it provides the backstory of what has led him to this situation in large part provides High Life’s strong heart and deep intelligence, and his much-anticipated collaboration with revered French director Denis has far exceeded its promise.

High Life reveals that Monte and a group of other young criminals from Earth were placed on the ship as part of a research project as it journeys towards a Black Hole. Believing they were part of a research project to study new forms of energy, they discover they are in fact human guinea pigs in a cruel, unethical human reproduction project, driven by sadistic scientist Dibs (Juliette Binoche). Forcing pregnancies using her male and female crew as donors and surrogates any way she can, Dibs is determined to create life in space despite the brutal effects of radiation on foetuses. How the inmates respond to this power dynamic largely drives the film’s narrative.

And yet this is, of course, a Claire Denis film, always and determinedly so much more than mere plot. Her profound and often disturbing representations of erotic desire and sensual pleasure excel in High Life, nowhere more vividly than in an extraordinary sexual vignette inside what is simply called “The Box”. Within this cold, technologically-advanced masturbatory chamber, one remarkable stand-alone sequence focuses on Binoche’s character indulging in the pleasures The Box offers the ships residents to keep sexual repression at bay. But the scene is so much more than this alone: quintessentially Denisian in its tone, style and content, women’s sexuality is presented in a fearless and unflinching way that is rendered deeply poetic, unflinchingly sexual, and breathtakingly beautiful at the same time. In High Life, Binoche’s waist-length hair is privileged as a cinematic spectacle just as a much as the film’s galactic setting.

High Life is fearless in other ways; fascinatingly, it includes two scenes of sexual violence that Denis appears demand we compare and contrast, forcing us to weigh up the ethics and meaning of each in relation to the gender politics of the other. One is committed by a man against a woman, the other by a woman against a man. They differ profoundly in mood and context, but the overarching meaning and significance of the act to both perpetrators and victims – and to their community more generally – are deliberately complex, making it extraordinarily difficult to conceptually simplify the act of sexual violence. Perhaps as to be expected of Denis, there is no room here for simplistic sloganeering.

What remains clear throughout the film, however, is that power, agency, and sexuality are as vital to Denis’s world view in space as they are in her more Earth-bound films. High Life is an accomplished, masterful work by one of contemporary cinema’s most vital visionaries, where questions of ritual and taboo are brought to life in a way quite unlike anywhere else in cinema history.