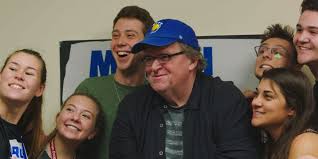 Documentarian Michael Moore has been called a muckraker, prankster and populist prophet for his political propaganda films (“Roger & Me,” “Bowling for Columbine,” “Where to Invade Next”), designed to elicit an emotional response. “Fahrenheit 11/9” references the date on which Donald Trump became 45th President of the United States. How did a reality TV host become Commander-in-Chief? How did that happen?

Moore whimsically references the fact that Donald Trump was irked that NBC paid Gwen Stefani more for “The Voice” than he got for “The Apprentice,” asserting that the salary disparity inspired the ‘fake’ press conference which inadvertently launched Trump’s Presidential campaign.

“We helped create a situation that has allowed us to end up with Trump,” Moore asserts. “The dumbing down of our society through the media, the lack of education through poor schools, allows for a dumbed-down electorate, and for him to actually get 63 million votes.”

Being the provocateur that he is, Moore further details Trump’s obsession with Russia’s Vladimir Putin, compares Trump’s ascension with Hitler’s fascism in Germany, and chronicles Trump’s smarmy infatuation with his daughter Ivanka.

That segues into the lead pollution of Flint, Michigan’s water supply and inherent governmental corruption, skewering not only Gov. Rick Snyder but also then-President Barack Obama, who made a show of sipping the local water, along with Hillary Clinton, Nancy Pelosi, Chuck Schumer and the rest of the entrenched Democratic establishment.

Edited by Doug Abel and Pablo Proenza, it’s scattershot agitprop. But I did learn the origin of the term “redneck.” It refers the red bandanas that West Virginia Union members wore to signify their loyalty.

On the Granger Movie Gauge of 1 to 10, “Fahrenheit 11/9” is an incendiary 7, a savvy ploy to encourage more women, more young people and more people of color to vote in the upcoming November elections.