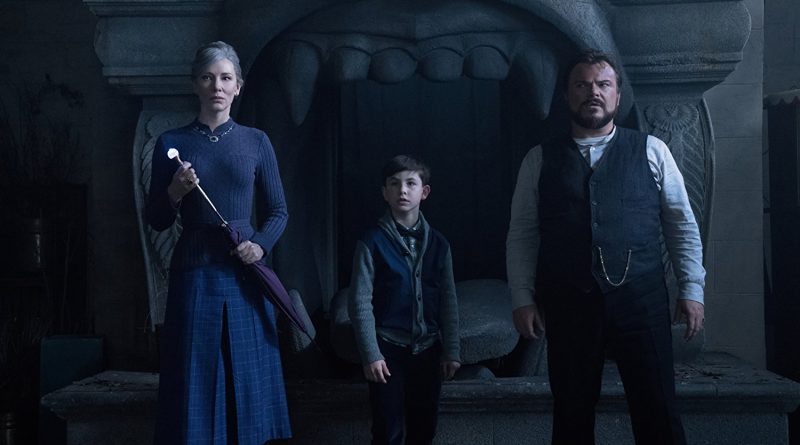 It begins in 1955, as shyly precocious 10 year-old Lewis Barnavelt (Owen Vaccaro) arrives in (fictional) New Zebedee, Michigan, to live in a Victorian haunted house, surrounded by a spikey wrought-iron fence, with his estranged, eccentric Uncle Jonathan (Jack Black), who has assumed custody after Lewis’ parents died in a car crash.

Jonathan’s regal BFF/neighbor, widowed Florence Zimmerman (Cate Blanchett), soon joins them, gracefully stepping out of the grandfather clock that connects their two homes. Mystic, mechanized figures and macabre symbols abound, including a whimsical chair that acts like a dog, so Lewis quickly realizes that she’s a witch – the good kind – and that his Uncle is a male witch, known as a warlock.

“The house likes you,” Jonathan assures his nerdy nephew. But, clinging to his Magic 8-Ball and determined to wear tanker goggles (in tribute to TV’s Captain Midnight), Lewis is, predictably, bullied at school. He’s an outcast, the last chosen for any sports team. Which is why he’s so flattered when a patronizing, popular kid seeks his approval.

Screenwriter Eric Kripke recalls that he first read Bellairs’ book when he was 10, crediting that source material to his creation of TV shows like “Supernatural” and “Timeless.”

Originating from a now-defunct 2011 Tumblr post, this genre is now known as “spoopy,” meaning scary-but not-too-scary, like “Beetlejuice,” “Coraline” and “The Nightmare Before Christmas.”

On the Granger Movie Gauge of 1 to 10, “The House With a Clock in Its Walls” conjures a sinister, spoopy 7. Shivery, supernatural fun for the whole family.