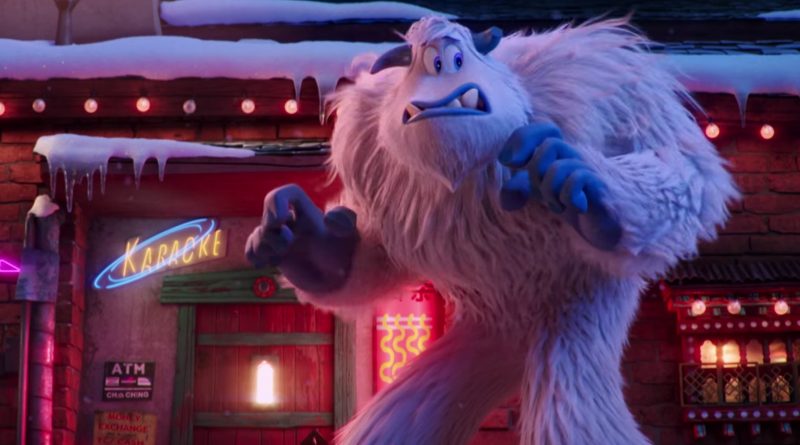 The Warner Animation Group movie cunningly turns the lasting legend of Bigfoot on its shaggy head with “Smallfoot.”

Directed and cowritten by Karey Kirkpatrick (the underrated 2006 animated feature “Over the Hedge”), “Smallfoot” transports audiences high into the Himalayas, where a village of yetis dwells in cheerful isolation.

Perky teenager Migo (voice of Channing Tatum) is especially happy with his place in this provincial ice land: He is apprenticing with his father, Dorgle (Danny DeVito), who holds the singular position as gong-ringer.

The gong-ringer’s job is to catapult himself headfirst into the gong to wake the giant glowing orange snail that travels through the sky to give light and heat to the world.

You know, the sun.

It turns out that Yeti culture is built on an elaborate set of myths and rules that are literally carved on small stones that form the robe worn by the village leader, the Stonekeeper (Common, who brings nuance to a role that thankfully proves to have unsuspected depth). No one is allowed to question the stones or the Stonekeeper.

Migo learns that the hard way when he misjudges a practice run at the gong and hurtles into the path of a crashing plane. He soon finds himself face to face with a legendary Smallfoot (aka a human), whose parachute swoops him away. The problem is that, according to the stones, there’s no such thing as a Smallfoot, and when Migo refuses to recant, he is banished from his village.

He doesn’t stay alone for long, as the members of the secret Smallfoot Evidentiary Society seek him out. The group is comprised the town misfits – Gwangi (LeBron James), Kolka (Gina Rodriguez) and Fleem (Ely Henry) – but its leader is none other than the Stonekeeper’s smart and inquisitive daughter, Meechee (Zendaya), who has a problem with her father’s decree that asking questions should be a banishing offense.

With the group’s help, Migo plots to venture below the clouds into what the Stonekeeper claims is nothingness and find proof that the Smallfoot is real.

At the same time, in a Nepalese village below the clouds, television nature show host Percy Patterson (James Corden) is feeling the pressure of plummeting ratings and viral video competition, so he plots to fake a Bigfoot encounter to regain his fame and fortune – until he encounters the real thing in the towering Migo.

In a nod to the Warner Bros. cartoon canon, “Smallfoot” boasts plenty of hilarious Looney Tunes-esque sight gags, but no amount of wackiness can help the animated musical’s original songs, penned by the director and his Grammy-winning songwriter brother Wayne Kirkpatrick, which are disappointingly generic.

Although some may find the film’s messages subversive, as a journalist, mother and deeply religious person, I found the themes about respectfully questioning rules and beliefs and seeking knowledge to be a refreshingly inspiring change of pace from the usual children’s movie messages.