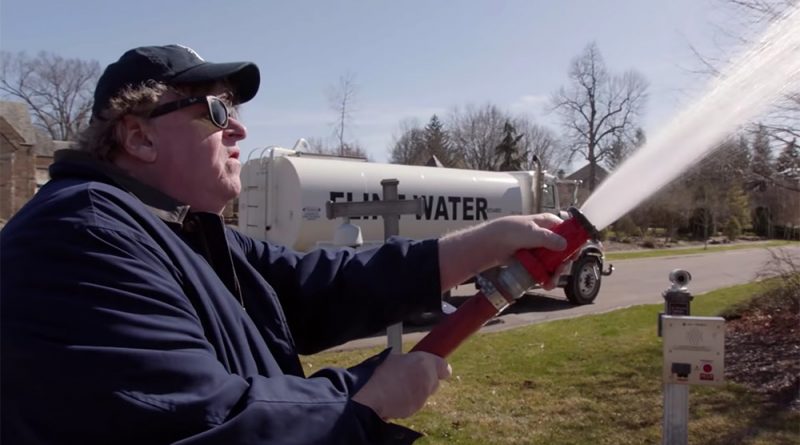 Fahrenheit 11/9 sounds a clarion call to political action. As with his politics, Michael Moore’s documentaries have never been subtle. So Fahrenheit 11/9 comes as no surprise with its compelling, vibrant approach to contemporary American issues. To support his case regarding our appalling milieu, Moore tackles a range of topics from President Trump’s bellicose comments to teachers’ strikes; Flint’s water crisis; Parkland, Florida shootings; and more.

Playing off Moore’s 2004 film Fahrenheit 9/11, the title Fahrenheit 11/9 derives from the Associated Press announcing Trump’s presidential win on November 9 at 2:30 a.m. with Trump’s image projected on the Empire State Building. The documentary itself begins before Election Day, advancing up to recent events. Early on, Moore states the two questions that motivated this project. One, “How did we get here?” and, two and, “Most importantly, how do we get out of it?”

Characteristic of Moore, well-researched, informative news clips and first-person interviews provide solid background and convincing evidence for his point of view. For those of any political persuasion, several expertly edited sections have powerful impact; namely, critiques of Michigan Governor Rick Snyder and President Barack Obama regarding the Flint water tragedy and the embedded racism; condemnation of the Democratic Party and their undemocratic treatment of Bernie Sanders; praise for the West Virginia teachers’ strike that spread to other states and service workers; admiration for the Majory Stoneman Douglas High School students who have and still are protesting gun violence, among other issues.

With additional music alternately mocking or complementing footage, Moore guides his interrogation, as usual, with his voiceover narration, sporting his alternately outraged and humorous commentary. Along the way, Moore includes footage of his previous interaction with Trump, Bannon, and Kushner, often to Moore’s regret now that he wasn’t a harsher critic then. He pushes his outrage in the closing chapter with parallels between Trump and Hitler, a step that follows from his arguments. However this is received, Moore is right that any autocrat wins when people give up and surrender the power they have. Fahrenheit 11/9 is Moore’s rousing call to imperative action which we ignore at our peril. At several cinemas; check local listings.