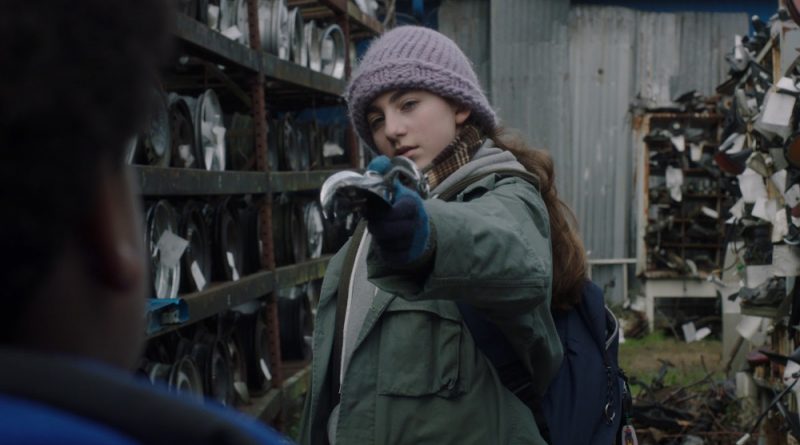 Writer/director Megan Griffiths gives us, with Sadie, a big screen character we don’t see often enough: an American girl, barely a teen, whose childhood has been defined by a distant war. Though we never see a battle, or her soldier dad, the war in the Middle East has created a void in her young life.

The film opens with a voice over as Sadie (Sophia Mitri Schloss) writes a letter to her dad, who’s been away fighting for what must seem an eternity to Sadie. She lives in a trailer park with her mom, Rae (Melanie Lynskey), who copes with loneliness by a casual dalliance with dorky suitor Bradley (Tony Hale). When handsome stranger Cyrus (John Gallagher, Jr.) moves into the trailer next door, Rae’s spirit is renewed by his attention. Rae is loving to Sadie, and tries to explain that her dad has pretty much abandoned them, but Sadie resents the intrusions of both Bradley and, especially, Cyrus.

This promising start falters as Sadie begins to morph from annoying adolescent into the bad seed. She puts her vulnerable young friend Francis (Keith L. Williams) in jeopardy with the school bully and engages in erratic, increasingly dangerous behavior with Cyrus, who doesn’t convey any real hint of menace, even when he’s supposed to be high on painkillers.

It’s refreshing that Rae’s best friend since childhood, Carla, is played by Danielle Brooks (“Orange is the New Black”) but Carla’s casual betrayal strains credulity. There’s are things to like in the film — the trailer park setting; Lynskey and Schloss’s performances — but as a portrait of adolescent angst, “Sadie” doesn’t offer any new insights. Still, I’m eager to see what Griffiths does next.