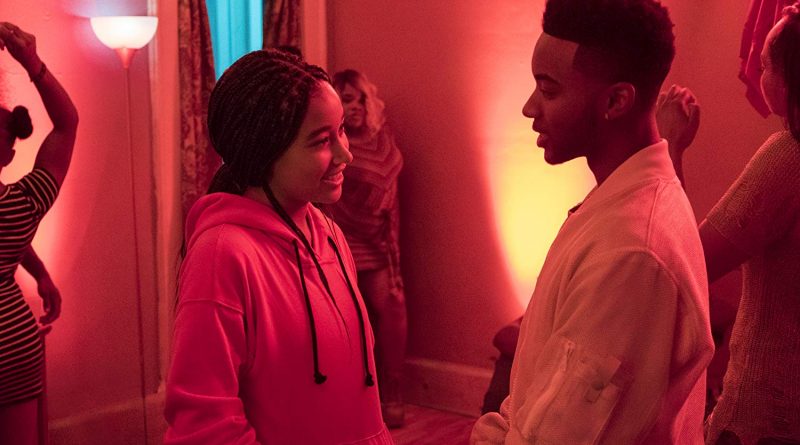 The Hate U Give impresses mightily. Everything about The Hate U Give is impressive — the tension throughout, the complexity of the storyline, the acting of the entire cast, the contemporary crises, the heart pumping through. Based on Angie Thomas’ novel for young adults, the film asks the viewer to be alert, thoughtful, and considerate.

It begins with “the talk,” known well in African-American families. The adults sit the young ones down to tell them how to conduct themselves when — not if — they are pulled over by a cop. Splay hands on dashboard, always in view; answer only what’s asked; no quick moves; no backtalk. This is the Carter family. Father Maverick runs a grocery store in the neighborhood of Garden Heights, mother Lisa is a nurse, Starr is 15. Mother drives her and her older brother to a private school to get a decent education.

In voice-over, Starr makes clear that she is two girls in one, an upright citizen of the black ghetto and the A student in the white school. It is the black girl, who, driving with her dear, old friend Khalil, witnesses his murder by a white cop. What is she to do? Tell Khalil’s story, thereby ruining her reputation at high school? Keep quiet about Khalil’s death, thereby dishonoring his life, including the drugs he runs to pay for his granny’s chemo?

Everyone chimes in with an opinion, especially the lawyer for Just Us Injustice, played seriously by Issa Rae. Starr’s father, who wants his star to shine, is played finely by Russell Hornsby; Starr’s mother, ever protective, is played by Regina Hall. Each of these actors, and the rest of the cast, including Common and Anthony Mackie, truly supports the story. But it’s Amandla Stenberg, who brings to Starr’s face and body and voice all the love, confusion, righteousness, and direction of a young woman faced with crisis. In the end, the film supports young adults, but there’s nothing wrong with that.