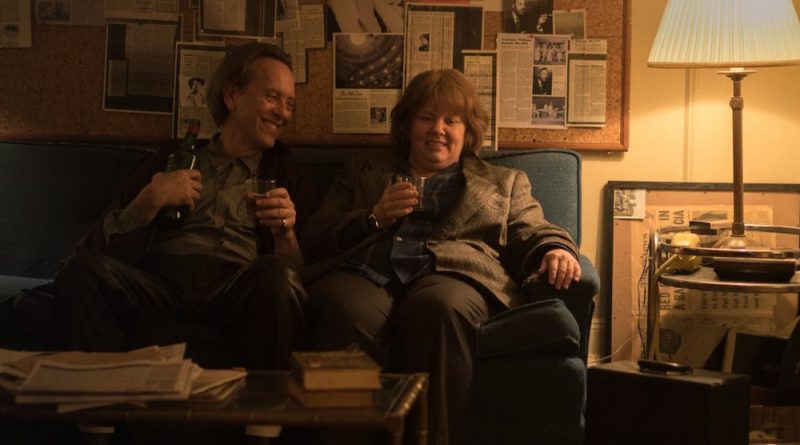 Melissa McCarthy gives a commanding performance in a rare dramatic role based on the true story of Lee Israel, a one-time New York Times bestselling biographer in the ’70s and ’80s, who has fallen on hard times and turns to a life of crime as a forger of letters from literary greats such as Noel Coward and Dorothy Parker. Whether Lee Israel’s fall was due primarily to alcoholism, changing popular tastes, a refusal to adapt to the marketplace, or just her own prickly personality is debatable but clearly she was a poster child for being one’s own worst enemy. With no other skill than writing and gift for mimicking the style of the great writers she admired, Israel embarked on a criminal endeavor that was both audacious and lucrative.

Movie promotional materials describe Israel as a cat lover but it is really only the one cat she cares about (and we later learn the reason for that). Israel says she prefers cats to people but she clearly prefers whiskey and soda to everything else. With disdain for all and a urge to insult, Israel makes enemies where ever she goes. McCarthy effectively conveys Israel’s anti-social personality in an early scene, when the author arrives at a party and immediately berates the hostess, going on to be rude to everyone else in reach. There is one exception to her curmudgeonly life, her friend Jack (played with great barfly charm by Richard E. Grant), another hard-drinking soul who shares her caustic wit. and eventually becomes her partner in crime.

There is nothing cuddly about this cactus of a person yet McCarthy draws us into her story and finds the human side under the hard crusty shell. Director Marielle Heller and scriptwriter build an engrossing tale of someone falling into crime one step at a time, as well as a portrait of a talented person whose own flaws sabotage her. Aided by a perfect score that features Billy Holiday and Lou Reed, Can You Ever Forgive Me? is by turns ironically funny and tragically sad. It makes for an intriguing, sometime jaw-dropping wild trip, topped by what is easily the best performance that McCarthy has ever given.