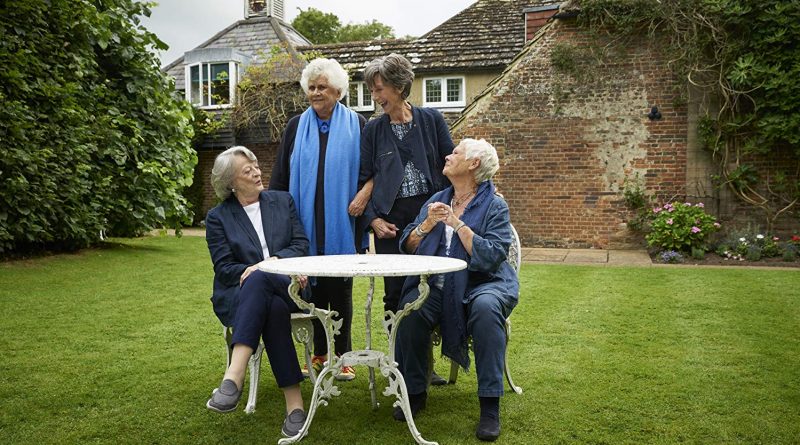 Tea with the Dames is everything in a tea party. Truly, in the midst of movies that call for blood, curses, and mayhem, “em>Tea with the Dames offers those ingredients elegantly and eloquently from dames of the British realm who are also stars of stage and screen. At tea are Dame and Lady Joan Plowright, Dame Maggie Smith, Dame Judi Dench, and Dame Eileen Atkins.

Originally titled There’s Nothing Like a Dame –indeed that title can be seen on a clapper board mid-film — the film was conceived by Roger Michell, the South African director responsible for Notting Hill,” among other films. He brought together these old friends, old colleagues, now in their golden years but with articulate memories — even if one has to help the other. For example, Dench cannot remember her response to a director who asked her to play the female lead in Shakespeare’s Anthony and Cleopatra. It takes Joan Plowright to deliver Dench’s turn-down: “You don’t want a menopausal dwarf to play Cleopatra.”

Michell also backs up the women’s memories with films of their work at the National Theater, the BBC, and films. It’s magic through and through.

Plowright is blind and Dench nearly so. Several of the women are hard of hearing, but the others kindly speak up for their sakes, knowing how to speak to the balcony. But they are all national treasures, to borrow Tracey Ullman’s line about Judi Dench. There are plenty of slaps at that actor’s reputation as the pre-dominant dame including moments over the closing credits.

Tea with the Dames is literate, funny, poignant, a respite and a reminder. Utterly delicious, this tea with Champagne with the Dames.
I’m Martha K. Baker. From the Grand Center Arts District, this is 88.1, KDHX, St. Louis.