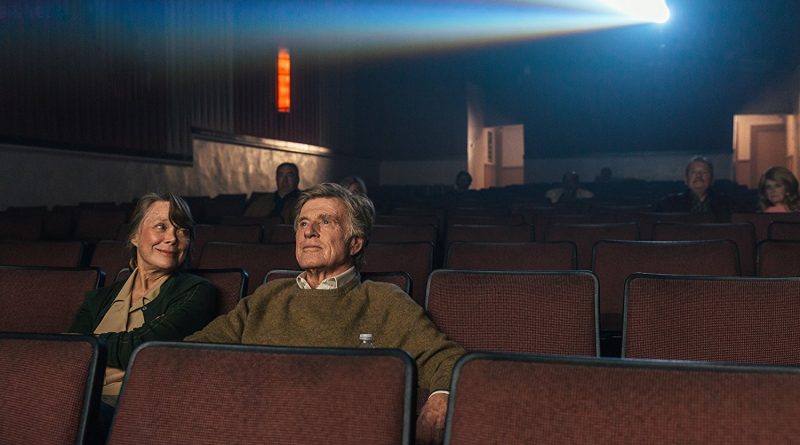 82 year-old Robert Redford claims this will be his final performance. If so, charismatic actor goes out with a dazzling smile. Based on David Grann’s 2003 New Yorker profile, Redford plays Forrest Tucker, a real-life con man whose greatest joy is robbing banks. It’s what he lives for!

Often working with two cohorts (Tom Waits, Danny Glover), dubbed ‘The Over-the-Hill Gang,’ he spends hours, even days, devising a plan. Then, dressed in a suit, tie and fedora, carrying a briefcase, he unobtrusively walks in, quietly asks to see the manager and politely demands cash.

There’s never any violence, and his victims often remark on what a courteous gentleman he is, always smiling.

Occasionally, he’s caught. Indeed, Tucker has spent his life breaking out of various prisons, starting with juvenile detention and including San Quentin and Alcatraz.

After one heist, Tucker evades the police by stopping to help a motorist with engine trouble. Over coffee, he becomes acquainted with Jewel (Sissy Spacek), a down-to-earth widow/rancher. Sure, they’re opposites but they have an almost combustible compatibility.

One of their most endearing scenes takes place in a mall, where he urges her to try on a bracelet and they blithely walk of the jewelry store without paying. Conscience-stricken, she insists that they return the bauble, much to his amusement.

Writer/director David Lowery makes most of the Redford/Spacek chemistry. Their scenes sizzle. And Lowery even works in glimpses of Redford in his youth. But the rest of the film is a drag.

Having worked with Casey Affleck in A Ghost Story, Lowery casts him as the brooding detective determined to capture Tucker. He’s a bore, as is his wife (Tika Sumpter). Their scenes stall. And Elisabeth Moss is wasted in a brief scene as Tucker’s estranged daughter.

On the Granger Movie Gauge of 1 to 10, The Old Man and the Gun is a melancholy, sluggish 6, yet Redford, a master at his craft, steals the show.