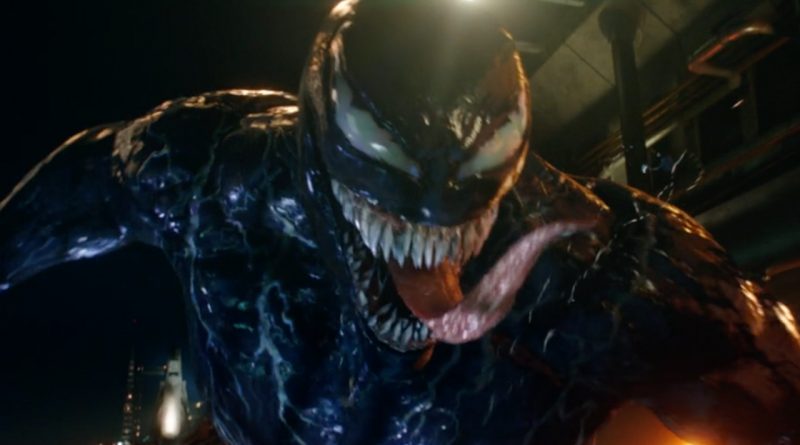 Venom‘s box-office take is yet another reminder never to underestimate the appeal of comic-book movies, especially when accompanied by an Eminem rap-song. While it’s not a Spider-Man film, Venom is made “in association with” Marvel Cinematic Universe.

The story begins when a space probe launched by diabolical Dr. Carlton Drake (Riz Ahmed), Life Fountain’s tech billionaire, brings a gelatinous alien symbiote back to Earth. When the glob merges with a compatible host, its human vessel becomes endowed with extraordinary superpowers and an insatiable hunger.

When Eddie Brock (Tom Hardy), an investigative TV reporter who rides a motorcycle around San Francisco, questions Drake, the symbiote attaches itself to him, slowly melding and transforming him into the hybrid Venom, much to the shock and dismay of his lawyer girlfriend Anne Weying (Michelle Williams), who turns to Dr. Dan Lewis (Reid Scott) to try to extract Eddie’s malevolent parasite.

That’s it – in a nutshell. But, of course, the carnage has barely begun since Venom informs Eddie that his species plans to invade Earth.

Weakly scripted as a Jekyll & Hyde-type origin story by Scott Rosenberg, Jeff Pinkner and Kelly Marcell, it’s clumsily directed by Ruben Fleischer (Zombieland) with Tom Hardy’s mumbling a bit more decipherable than it was when he played the villainous, heavy-breathing Bane in The Dark Knight Rises.

Following the lead of other comic-book movies, there’s a lengthy end-credits sequence, starting with Eddie and Venom driving to San Quentin Prison to conduct an interview with psychopathic serial killer Cletus Kasady (Woody Harrelson) – a.k.a. Carnage – teasing interest in the inevitable sequel.

Then there’s a predictable plug for Sony’s Spider-Man: Into the Spider-Verse, set for release on December 14th.

Bottom line: to quote the screenwriters, it’s “a turd in the wind.”