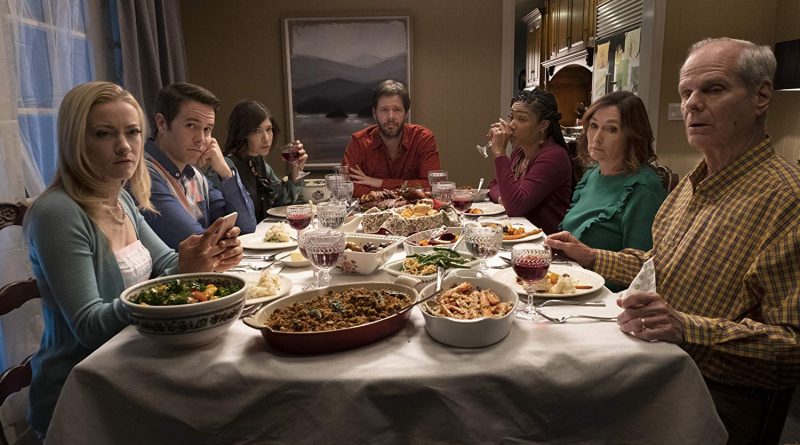 The Oath is outlandish but funny. Add The Oath to the list of Thanksgiving movies wherein family tries to come together over turkey giblets. The Oath does not rise to the level of Pieces of April, but it offers outlandish satire amid family politics in the midst of a national situation that calls for little t thanksgiving.

The title refers to a loyalty oath demanded of America’s citizenry by its government. No one will be penalized for abstaining, but there will be tax advantages for those signing. The deadline is on Black Friday, historically the grandest day for retail following the grandest day for humble pumpkin pie as the nation bows its head in thanksgiving.

Chris, played by the film’s director, Ike Barinholtz, became a news addict after the last divisive election. He keeps a picture of Gene McCarthy on his office wall. He has discussed his views against never, ever signing with his peacemaking wife Kai, played thankfully by a downplaying Tiffany Haddish. They and their daughter are getting ready to welcome Chris’ family in for the Thursday feast. That includes a bombastic brother (Jon Barinholtz) and his dull as dishwater wife (Meredith Hagner); a fussy mother (Nora Dunn), who sent a pre-emptive e-mail begging “no politics”; Dad, ignorant about the remote and lots more; and Sis, played by Carrie Brownstein.

Unwelcome guests at the groaning board are Homeland Security’s new Citizens Protection Unit, including John Cho. The CPU has arrested filmmaker Seth Rogan, among other scofflaws.

Expected of such a plot are the loudly delivered angst, argument, fireworks, and forensics. However, The Oath also delivers humor, especially the domestic kind, with Ike Barinholtz’s understanding of family dynamics. He writes dialogue that tosses out “he smithed the scones” and mixes up “canoodling” with “colluding.” Plus, under Barinholtz’s direction, whoever had the blood concession made a killing. “The Oath” offers one, albeit wan, response to the current political landscape as the nation prepares for Thanksgiving.