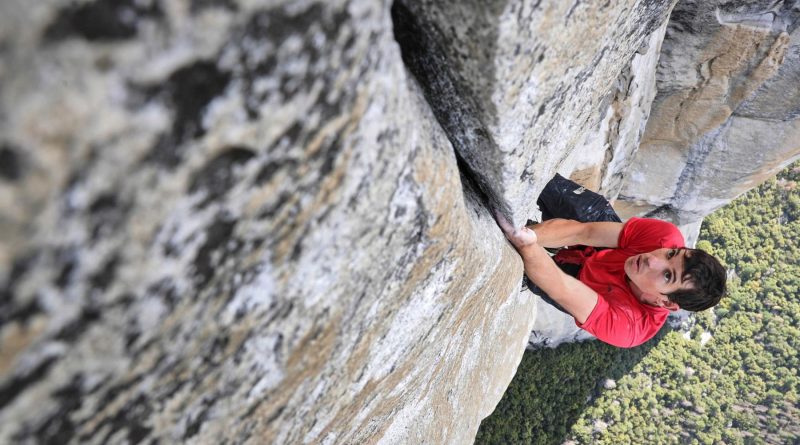 What kind of person risks life and limb to climb the treacherous face of Yosemite National Park’s famous 3,200-foot granite wall, known as El Capitan, without a rope or any other safety equipment? Seemingly carefree daredevil Alex Honnold has completed more than 1,000 solitary climbs and is thought to be the world’s greatest surviving free-soloist.

Recalling an emotionally isolated childhood in Sacramento, California, and a “bottomless pit of self-loathing,” Alex keeps a meticulously detailed journal about his mountaineering, noting every hand and foot placement.

A self-confessed ‘dork’ and ‘loner,’ ascetic Alex eats cans of beans warmed on a hotplate and lives in a white, minimally equipped van – without a bathroom. He dates occasionally but declares that he “will always choose climbing over a lady.”

At a book-signing for his memoir “Alone on the Wall,” Alex meets cheery Sanni McCandless, who shares Alex’s climbing passion. “I’m patient,” she says, supportively. “But I also have self-respect.”

Chronicled by his longtime friend/collaborator Jimmy Chin and his wife Elizabeth Chai Vasarhelvi (“Meru”), along with cinematographers Clair Popkin and Mikey Schaefer, this thoughtful documentary delves into Alex’s thrill-seeking motivations, including his receiving an MRI to see if his brain is askew.

Analysis of that test reveals that Alex’s amygdala (the brain’s fear center) requires unusually high levels of stimulation before the fear response actually kicks in.

His troubled mother, Dierdre Wolownick, wonders if he’s on the Asperger’s spectrum, although Alex recalls that one of her favorite sayings was: “Almost doesn’t count. As his fatalistic friend/veteran climber Tommy Caldwell notes “Everybody who has made soloing a big part of their live…is dead now.”

There’s no doubt that the 20-minutes covering Alex’s historic, less-than-four-hour climb on June 3, 2017 is tension and vertigo-inducing, particularly on the big-screen.

On the Granger Movie Gauge of 1 to 10, “Free Solo” is an awesome, intense 8, particularly appealing to extreme sports enthusiasts.