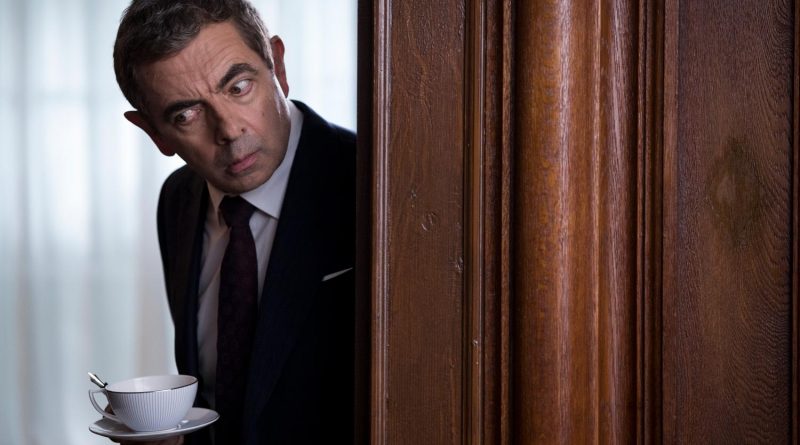 English retired. Yes, he went to teach geography, but he was not teaching so much as scouting for potential operatives. He teaches his charges to camouflage themselves and to toast with martinis. Then, as luck and the plot would have it, a cyber attack hits the Motherland — well, at least my motherland — wiping out agents of MI7. Only a few other retirees are left — played in cameo by the greats Charles Dance, Edward Fox, and Michael Gambon, tee hee. Then, oops! only Johnny English is available, so he has to be assigned to find out who is behind the cyber attack.

He grabs his wingman Bough, played in perfect reaction by Ben Miller. English drives off in a bright red car to be inconspicuous; he eschews all modern spy devices like a smartphone and leans on pay phones, his wits and wiles.

English and Bough encounter a Russian agent, played by Olga Kurylenko, recently seen in The Death of Stalin. Then there’s the American cyber hotshot, played by Jake Lacy (Obvious Child). But the best acting partner for Atkinson is Emma Thompson, a great actress, a fine writer, and a comedienne with chops (have you seen her early work?). She brings to the role of the prime minister all the frisson and fashion and fecklessness the role calls for.

But the film belongs to Rowan Atkinson. That face, those eyes, that mouth, that agile little dogsbody. David Kerr’s crafty direction wisely moves fires and explosions off stage or in back. William Davies’ screenplay, heavy on the rhetorical figures of litotes and hyperbole, offers knights in rusty armor (hint: the spy is in the mail).

Johnny English Strikes Again could not be striking at a better time. Be prepared to laugh — outright and prolonged.