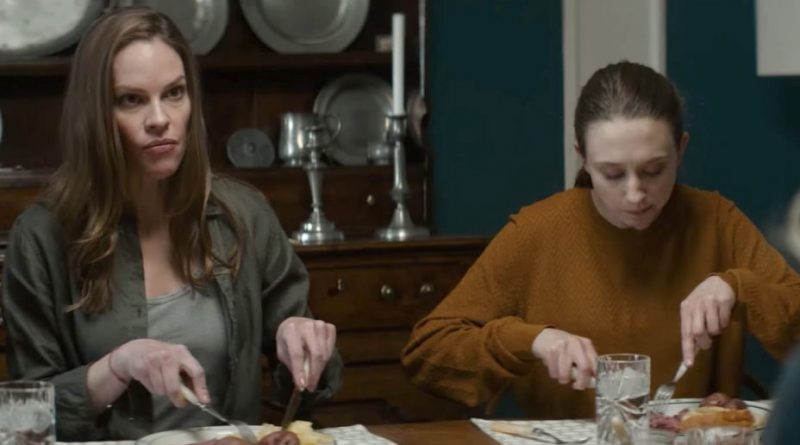 You have to admire first-time writer/director Elizabeth Chomko for assembling a star-studded cast for this poignant, multi-generational domestic drama, inspired by memories of her own grandparents. Set in the Chicago area, the story begins with clips of old home movies as elderly Ruth Everhardt (Blythe Danner) slips out of bed and shuffles off down the street into the cold, snowy night, clad only in a nightgown and sweater.

A panicked call from her husband Bert (Ben Forster) summons their nearby son Nicky (Michael Shannon) and his sister, Bridget (Hilary Swank), who quickly takes a plane from California with her reluctant, rebellious daughter, Emma (Tessa Farmiga), who has dropped out of college.

By the time Bridget arrives, disoriented Ruth has been found and briefly hospitalized. That’s when the family is advised that Ruth, who is suffering from Alzheimer’s, should be in a full-time “memory care” facility, particularly one that Nick has conscientiously researched. If Ruth is there, Burt could stay in nearby assisted-living.

But stubborn, devoutly Catholic Bert will hear none of it! “She’s my girl! You can’t take my girl away from me.”

His adamant refusal to be separated from his soulmate triggers utterly predictable generational conflict.

Meanwhile, Bert’s adult children have their own issues. Bridget feels she’s been saddled with a stale marriage to a lawyer (Josh Lucas), whose proposal she accepted only because her father approved. And volatile Nick, who sunk all of his savings into a neighborhood tavern, can’t seem to commit to his long-time live-in girl-friend.

While Robert Forster, Hilary Swank and Michael Shannon are excellent, it’s Blythe Danner who delivers the most memorable performance. And, near the conclusion, bewildered, childlike yet often candid Ruth utters the film’s most insightful line of dialogue.

On the Granger Movie Gauge of 1 to 10, “What They Had” is a sensitive, yet ultimately soapy 6, an all-too-familiar family drama.