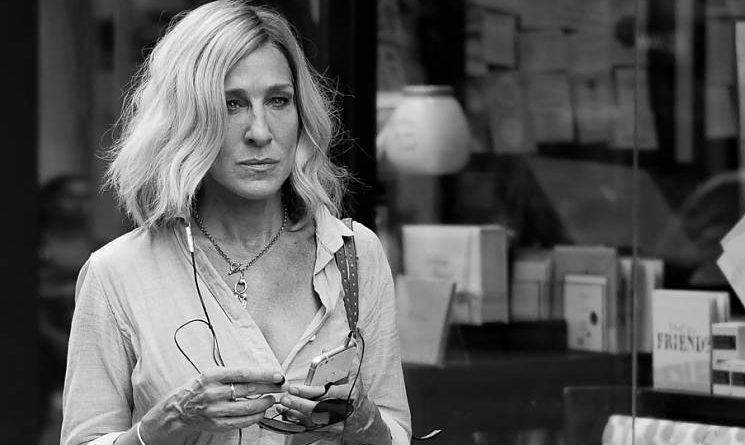 I read a bit about what was once called Blue Night and is now called Here and Now, directed by documentary filmmaker Fabien Constant, before I saw it. Starring Sarah Jessica Parker, the story takes place in Manhattan, but is a far cry from her Cosmopolitan-swilling single lady escapades in Sex and the City. Instead, it is about a moody singer in the midst of preparing for a major engagement who learns that she has a possibly deadly brain tumor. Much of what I heard about this dazed walkabout through urban landscapes dotted with encounters, both by chance and arranged, sounded contrived and uninvolving.

But it kept me watching, fascinated to see what would come next for Parker’s Vivienne who strolls about in stilettoes, a pleated white skirt and a denim shirt opened down to there with a necklace that has a heart-shaped lock. She is mostly ignored by others as she works through her bad news and tries to attend to the day at hand. She rehearses. She refuses to open up to a shallow reporter. She deals with her self-centered French mother (Jaqueline Bisset), who is staying with her. She has sex twice with her drummer boyfriend. She buys a gorgeous gossamer gown and nearly loses it when she takes a Lyft. She stops by the apartment of her ex-husband (Simon Baker) to see her teen daughter and then runs into an old tipsy friend (Renee Zellweger) outside a restaurant who is celebrating her birthday. Then Vivienne sings a song at a club, a fluttery ditty by Rufus Wainwright with lyrics that contain the phrase “unfollow the rules” that is more Broadway than jazz or blues.

That is quite a day. On top of that she keeps running into the same Lyft driver, who is having issues with his wife. They share an appreciation of Django Reinhardt and he becomes her guardian angel of sorts. Parker flutters her hands on her face now and then, as if to see if she can feel it, while her intense blue eyes practically shoot out rays of pained emotion and uncertainty. It seems she digs going deep for once and that isn’t a bad thing.

And, all the while, her likely fate hangs over her like a medical sword of Damacles. I don’t know what to make of Parker’s breathy whispering of “I Think We’re Alone Now” over the end credits but it is apt enough conclusion to an open-ended but not unpleasant watch.