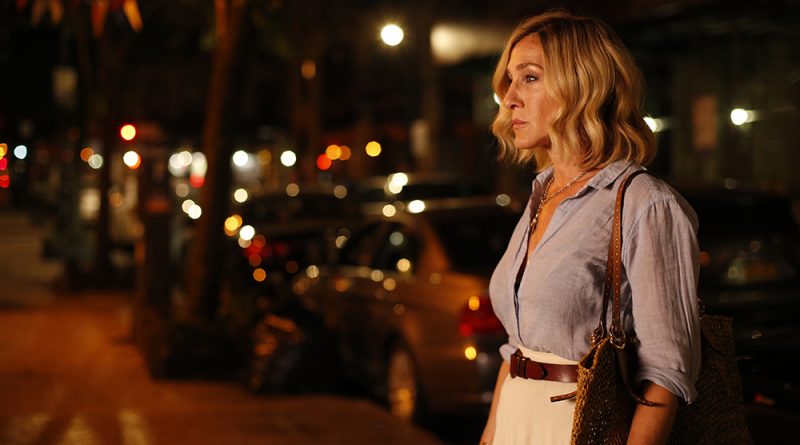 How would a day unfold when it starts with a doctor delivering a grim diagnosis? That’s the premise of Here and Now, a modest but affecting drama written by playwright and House of Cards scribe Laura Eason. It’s an intimate character study that rests on the lead performance from Sarah Jessica Parker, de-glammed save for her Kim Novak platinum hair. Parker plays Vivienne Carala, a successful vocalist preparing for an anniversary show at New York’s legendary Birdland.

After receiving the news that she has a brain tumor and must begin immediate treatment with uncertain odds for survival, Vivienne wanders in a fog though New York City, trying to go about her day while in the grip of her own mortality. She meets with her caring manager (Common) but doesn’t tell him the news; she sits down for an excruciating interview with one of the most clueless and unprofessional interviewees on earth (why, oh why?); she has a sexual tryst with her drummer Jordan (Taylor Kinney); she accidentally runs into an old friend (Renée Zellweger, for no apparent reason) who talks her into a drink and some catching up. Meanwhile Vivienne’s French-speaking mother (Jacqueline Bisset, maturing beautifully just like Parker) is visiting and bombarding her daughter with phone calls.

The storyline echoes Agnès Varda’s French New Wave classic Cléo from 5 to 7 (1962), with a heroine awaiting the results of tests that might reveal cancer. That focus was intimate and novel in 1962; here, despite Parker’s presence and strong effort, the character’s paralysis is relentlessly downbeat. Vivienne roams the streets of New York to a jazz/classical score by Amie Doherty, but there’s little of the vibrancy, playfulness or odd, joyful encounters that made the New York of Parker’s landmark Sex and the City so memorable.

Some may be frustrated by the film’s lack of explanations: why are Vivienne’s relationships with her mother, her ex-husband (Simon Baker) and even her teenage daughter (Gus Birney) so prickly? As day turns to night, Vivienne drops into a cabaret where Jordan is performing and sings the Rufus Wainwright song Unfollow the Rules with a quiet, gutting grace. The scene conveys Vivienne’s fears and sadness for a life interrupted as much as the rest of the movie does. Parker’s voice is far more suited to cabaret than jazz — her intimate performance reminded me that Parker was a prominent and enthusiastic presence at Barbra Streisand’s One Night Only Village Vanguard show in 2009. The end credits also feature Parker’s tender rendition of I think We’re Alone Now, which might reduce you to tears if you haven’t shed them already.