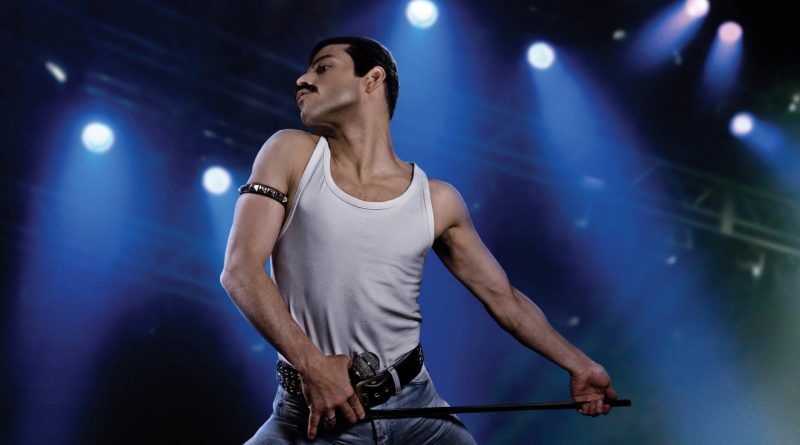 Bohemian Rhapsody soars like Mercury. Freddie Mercury lived. He lived boldly, brilliantly, wildly, musically, and he died far too young of complications of AIDS. The band, Queen, collaborated with their drama queen on the music, its presentation and its evolutions. And Bohemian Rhapsody re-vivifies the life.

The movie, which moves chronologically, begins in 1970 with Mercury still living at home with his parents in London. His father tells him that he needs “good thoughts, good words, and good deeds.”

Mercury changed his ethnic name, and the band, once known as Smile, becomes Queen. As lead singer, Mercury manifests his potential, and the music evolves from rock to the operatic title tune, which is shown in recording, to the audience-involved “We Will Rock You.” The film rises to historical heights with Queen’s performance at Live Aid in 1985.

Freddie Mercury is brought to life by Rami Malek, also seen in the excellent Short Term 12. Malek has the physical sinuousness that mirrors Mercury’s on and off stage. To imitate Mercury, Malek wore a dental apparatus to approximate Mercury’s wide jaw, which he said gave him more space in his mouth and, therefore, more vocal range.

He is well supported by Lucy Boynton as Mary, his close friend; as Queen, Gwilym Lee plays Brian May; Ben Hardy, Roger Taylor, and Joseph Mazzello, John Deacon. Tom Hollander plays the strait-laced Jim Beach, who is one of the film’s producers. And a litter of cats.

Anthony McCarten’s screenplay could have spent more time on Mercury as a crack composer and better developed Mercury’s transition from heterosexual to homosexual. Credit for the film’s admirable look goes to Newton Thomas Sigel.

Bohemian Rhapsody — a biography, a musical, a history — succeeds with each whether Freddie Mercury is a new entity or the object of long fandom.